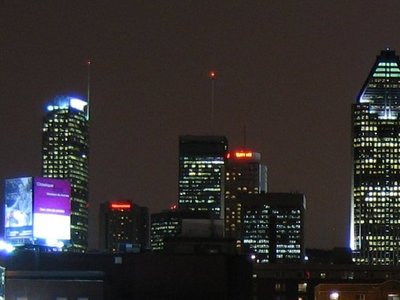 Some time ago, myself and a fellow Dudefest Dude took a trip to Montreal, for no reason other than to get shitfaced and do hoodrat things. Both of which we did, quite well. We left for Montreal at noon on a Saturday, planning to arrive at a cheap hotel by around 4 PM.

The drive was uneventful until we reached the border, where we were questioned for about ten minutes about our intentions. The border agent was pretty hot, too, so that threw me off. She asked me several questions, including where I was from and what I did for a living, and I was totally unprepared for all that interrogation—I thought it was way easier to get into Canada, and they only grilled you on the way back into the US. So I answered Hot Border Agent's questions as honestly as I could and as well as I could, and I still managed to make a complete ass of myself. Selections of the exchange below, in order to highlight my most embarrassing responses:

HBA: "Where are you staying?"

HBA: "Do you have a reservation already?"

Me: "Yes. Well... yes." I held up my cell phone, as if showing her my phone would convey that I was going to get a reservation through a hotel app, but I just hadn't done it yet. This message did not come across as clearly as I had hoped, and Hot Border Agent just looked at me like I was acting like a moron, which I was doing, so I can't blame her. The rest of the exchange continued with her realizing I was possibly the dumbest person she would interview that day.

HBA: "When was the last time you were in Canada?"

HBA: "Anything in the car with you? Other than clothes, obviously?"

HBA: "Meeting anyone in Canada?"

I assume at this point she had realized that the reason I was giving her stupid answers to her questions was because I am honestly just a stupid person, and not because I was nervous about bringing illegal things into Canada. Once she had gotten enough of my ridiculously dumb answers to her simple questions to tell several stories about me around the water cooler, she let us into the country. As we drove away from the border, I looked back on the dumb shit I said, and I said to my buddy, "Wow, I am honestly surprised she let us into the country with those answers." He agreed that it was definitely not my smartest moment.

We found our hotel pretty easily, even though all the street signs in Montreal are in some weird, dead language I've never heard of. We parked the car and put our shit away in our room. We only got one room, obviously, because dudes aren't shy about sharing space with other dudes. And frugality is dudefest—it frees up more money for beer.

We killed time for a few hours, doing dumb shit, probably (I don't totally remember), until it was a more normal time to go to some bars. We did exactly that, and we got real shit-faced on expensive Canadian beers. And we tipped our bartenders and servers, so you French Canadian bastards better remember that next time you come through a restaurant in upstate New York on your way to or from New York City and decide to leave a handful of change for a 2% tip. Fuckers.

Once we were sufficiently drunk enough to make some bad decisions and do some hood-rat things, we went to the best place in the world for those two goals: a strip club. And we picked, like, the worst one, because that place was fuckin' empty. There was one hot stripper and five subpar ones. And we're talking stripper hot for the "hot one," so, yeah, use your imagination for "subpar."

We ordered some crappy beers that cost approximately way too much money (you know, strip club shit) and sat down at a table and waited for the titties to come out. The stage was empty, and all of the strippers were hanging out with the only other person in the place, a guy that must have been as rich as he was fat, because like five strippers were all up on him, including the Hot One. Finally, two subpar strippers came over to our table, and proceed to try and convince us to spend a shit-load of money on private dances.

Being frugal, I was having none of it, I just wanted the Hot One to get up on the stage and start bein' naked. I mean, it was a strip club! With no naked chicks! It was unacceptable. So, instead of doing the smart thing and leaving and going to one of the literally hundreds of strip clubs well within walking distance, we eventually got drunk enough to agree to private dances from the subpar ones. They led us into separate private dance rooms (and not like, the happy ending kind) and started doing their stripper shit (i.e. stripping).

Subpar Stripper was understandably startled, but being the pro that she is, she still tried to get me to continue the dance. I was drunk and determined to get the fuck out of there so she was unable to convince me. She took me to the bouncer/cashier (it was a weird place) to have me pay for the dances. I have no idea how long I was in there, but apparently it was ten songs. And at $15 a song (plus tip), that's a hell of a tab to settle. So, in the name of frugality, I was determined to get the fuck out of there without paying.

First, I managed to haggle them down to only nine songs, because I decided I was done during the last song. Surprisingly, they went for it, mostly because I was the most belligerent I have ever been (and I get fucking belligerent). Then, they brought me over to their ATM, and I managed to continuously fuck up getting money out, and blame it on my American bank, and they bought it. Seriously, I was just doing dumb shit like putting my card in backwards, typing in 5-digit PINs, and just rapid firing buttons on the machine when it prompted me for my PIN, all with the bouncer breathing right over my shoulder. I kept saying that sometimes my card doesn't work on certain Canadian ATMs, so that's why it wasn't working. And after all my attempts the bouncer seemed to buy it, because he said, "OK, there's an ATM across the street, go try that one." And he let me leave. Alone. So, obviously, I sprinted the fuck out of there back to the hotel.

I left my fellow Dude behind, hoping that he would be fine. Honestly, I wasn't really thinking about him, I was just trying to make sure I didn't either get my legs broken or end up in a Canadian prison (or both). He told the bouncer that he didn't know me that well, that we had just met that night, and that he honestly didn't like me that much and in fact he thought I was kind of a dick.

I got back to the hotel just fine, nobody followed or murdered me (obviously), and the next day, crossed back into the US just fine. And that, dudes, is why I can never go back to Canada. For a while, at least.

Sue is a boy's name.

Sue, you sound like kind of an asshole.
Pete Hall

Well, you are our resident expert, so I'm inclined to agree with you.
The Forum