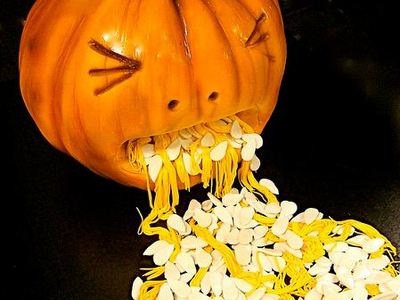 Let me tell you about one of the most eventful nights my friends and I ever had. It was one of those nights where something insane happens to everyone in your group, and we had quite the range of craziness. Good, bad, stupid, scary, hilarious—different combinations of these words could describe each of our evenings. I had a rollercoaster of a night. It started off great, took a nose dive towards horrible, and then ended on the best (non-sex) note imaginable.

Now I don’t want to call out this friend directly, but let’s just say he may or may not be another writer for this website. To protect his dignity, I’ll give him a stupid name like Chad. Well, Chad and I were roommates through pretty much all of college, and at the time we were living in the Boston area in our first year out of school with our other college roommate (let’s call him Dave). We spent most of our time working, and by that I mean that they worked and I applied to a few jobs and watched youtube videos, but we were still managing to have fun on the weekends. The weeks crept by, and soon enough Halloween was on the horizon. Being fresh out of college, we felt that it was our obligation to go out and get absolutely trashed as we had grown accustomed to doing.

The chance at a guaranteed hangover came in the form of a Facebook invitation from some other former roommates. Our friends from college all wanted to go out to a club called Tequila Rain (for all you Boston people, you know that’s the classiest club in the city), so the three of us joined in. At around 7:30 or 8:00 on a Friday night, we headed over to our friends “Karen” and “Ashley’s” house since they live a little closer to the club. I forget what our costumes were, but they were all definitely something that we half-assed and the girls were really disappointed in us. Either way, once we got there we started drinking. There were jello shots, a lot of liquor, and we brought over a 30 of Natty Light because that’s how we do.

I should mention here that ­­­Ashley and I had a weird relationship through senior year where we hooked up a few times but didn’t ever bang, and at that point in time we pretty much hooked up any time both of us got pretty drunk. Obviously, this pursuit consumed a lot of my night, but I’ll get to that later. The real game-changer in this story, though, is that she invited her really good friend April out too. April, it is important to note, is a lesbian. So, to recap, the group out this night is me, Chad, Dave, ­­Karen, Ashley, April, ­­Karen’s boyfriend Sam, and our other friend Ben. Got that backstory? Good, let’s continue.

So now it’s about 9:30, and we’ve all gotten relatively drunk. Well, actually we were all pretty hammered. We jumped on the subway and headed into the city. Ashley and I were starting to get pretty close on the train, probably at the disgust of all our friends, so I was too distracted to see Chad and April begin to get to talking. Now at this point, Chad had no intention of hooking up with April, nor did he think it was even a possibility, but this night proved that miracles do happen. We got to the club, made our way inside, and definitely bought more drinks that we needed.

We originally threw our jackets down at a table since we were kind of early, and then several of us went out onto the dance floor. Sam stayed behind to watch our stuff as Karen was in the bathroom. It was at this point that some drunk guy came up and started bothering Sam, which got him a little mad. The guy left but a bouncer came by to ask about it, and Sam didn’t recognize that the bouncer was a different human being. Naturally, he swung at the guy and connected, and all the bouncers descended on him like a pack of wolves. All I remember was seeing Sam and Karen outside of the club, him yelling at the staff and her in tears. Two down for the night.

Our group of eight had become six, but we were too drunk to really register what had just happened. Besides, Ashley and I were dancing pretty close and Chad and April were starting to as well. After we all had a few more drinks, when it looked like Ashley and I were about ready to turn our grinding into a public hookup, Chad and April issued us an ultimatum. If you two hook up, they said, we’ll hook up. That was just the push that we needed, and we immediately began to do our best dance-floor makeout moves. This is where I began to lose track of time, as I was pretty set on what I was doing. All I know is that eventually, Ashley left to go to the bathroom and I reacquainted myself with the world around me. Chad and April were gone, and Dave and Ben were missing in action. Then I noticed Ashley heading for the exit, and I went up to meet her. She said she was leaving, so I offered to take her home. She told me to stay where I was and look for our other friends, and drunk me believed that this was actually what she wanted me to do. This was incorrect, and she proceed to walk home crying by herself. Needless to say, I didn’t have sex that night. I found Dave soon after, and we headed back to our house. I later learned that Ben went to have sex with some dude in a car (Ultimate Dudefest).

I was pretty upset and confused with how the night went, and this compounded on my everyday stress about finding a job put me in a bad mood. Dave and I sat in our living room for a few hours that night as I vented in that way that sad drunk people vent. This went on until about 3:30 AM or so, when our conversation came to a screeching halt when we heard someone stumbling out of Chad’s room. In the hallway, walking towards us, emerged April, completely naked, trying to open the door to our hallway closet. Dave and I were speechless, unable to process what was happening before our eyes. Without words, I just pointed down the hall towards our bathroom. Her glazed-over, lifeless eyes honed in on my hand signal and she began stumbling away.

About half an hour later, Dave and I finally went to bed. We obviously had to re-hash what just happened, which took some time. I was about to close my bedroom door, but Dave looked at me from down the hallway and said, “I can’t go to sleep.” I asked why, but in the back of my mind I knew why. April had walked out of the bathroom and climbed into the wrong bed in the wrong room. She was now sleeping fully naked in Dave’s bed, leaving Chad alone. We couldn’t bring ourselves to wake her up, so I let Dave sleep in my bed for the night.

When we woke up the next morning, we didn’t see any trace of her in his bed except for unmade sheets. Dave made himself some breakfast, while I puked up tequila into the toilet. Eventually, April walked out of Chad’s room, awkwardly saying hi to us as she left. She obviously realized she was in the wrong place at some point in the night and migrated back to Chad’s room. Luckily, she didn’t remember running into us that night (or if she did, she must not get embarrassed very easily). But the kicker is that Chad didn’t remember anything either. He claims to have fallen asleep seconds after their sexing ended, and he woke up in the morning with her in his bed. He had no idea that she spent most of the night somewhere else.

The best stories always come from wildcard nights, so I recommend forming a basic, boring plan and then drinking way too much to follow that plan. That’s what we did, and it gave me memories to last forever and it gave everyone else crippling hangovers and blackouts. Several lessons could be learned, like don't let a girl who you're friends with and hooking up with walk home alone, don't fall asleep before your hookup comes back into your room, and especially don't pass out in someone else's bed completely naked. But lessons are for nerds, the real take-away here is that Chad had finally one-upped me in the "hilarious hookup" category. Now I have a good story to tell whenever his family's in town. They don't like me very much.

Henry "Get Away From Me" Henry is expecting his pizza delivered in 30 minutes or less.

At first I though Chad must have been Kennedy, but after reading the whole story I now know theres no way that is true, he's either Dave or Ben
The Forum