The Comedy Site That Won't Give You A Horrible Rash!
MUSINGS FROM OUR CHEAPSKATE BEER SNOB

A Trip to the Shmaltz Brewing Company
Jimmy Fraturday
June 13, 2014

A few weeks ago I took a trip with Hollywood Fraturday (my father, for those of you who haven't been paying attention) to our friendly neighborhood brewery. Shmaltz has been located in my hometown of Clifton Park, NY for just over a year now. The brewing company has had several different homes during its lifetime, starting in San Fransisco, CA, then moving to Brooklyn, NY, before eventually settling upstate in Clifton Park. Just as a side note, the last few years has seen a steady increase of breweries and wineries upstate, thanks to an increased interest in local beer and wine, and some pretty sweet tax breaks from the State.

This brewery kicks serious ass. You enter their large tasting room, that has wooden floors and an expansive seating area. There are oak barrels, comfy couches, and of course, barstools and tables dotting the room. Right next to the door you can pick up cases of your favorite of their brews and snag some Shmaltz schwag if anything catches your eye. The taps are located toward the rear of the tasting room. They rotate in 5 different seasonals at a time, so there are 5 different reasons to get drunk at any given time. After all, you have to try them all to figure out which is your favorite.

A door to the right of the tap area brings you back to where the magic happens, the actual working brewery and bottling plant. I won't get into the specifics, mostly because I was already buzzed when I was on the tour, but it is an expansive operation they've got going on. Most of the staff is actually from Brooklyn and they commute up to Clifton Park for a few days at a time before returning downstate. They do lots of events in Brooklyn, so keep your eyes open and your eyes peeled.

The first is their business plan. Unlike many local craft breweries, whose entire marketing and distribution strategy revolves around building a small local market and really not expanding too far from home, Shmaltz does the exact opposite. They distribute across the entire country, in small targeted areas. I asked the owner if this was a "good" business model and he laughed and said something along the lines of, "Yes." So next time you're in your local beer store or beer garden, look for Shmaltz. Chances are it isn't there, but it might be, and you should put it in your mouth.

Secondly, Shmaltz loves to experiment. I had my first ever "sour beer" from Shmaltz. I recently discussed sour beers with my new hipster bartender friend in Brooklyn, and in his opinion sour beers are what IPAs were 5 years ago. So they'll be cool in 5 years I guess. To make their sour beer special, Shmaltz blends 7 of their craft beers together. But before they do that they age those different beers for different lengths of time in old bourbon or rye barrels. The finished product is what they call Funky Jewbalation (all of their beers have clever Jewish names because it's a Jewish brewery) and it is an experience for your mouth. It's a dark beer, with an initial taste that screams, "I'm here to make your mouth freak out". It is initially sour, but not so sour that you cringe; if biting a lemon is a 10, this beer is around a 3. After you start to swallow, the taste softens and you can taste hints of fruit like citrus. It finishes softly and begs you to try another sip, mostly to try to sort out the confusion that is going on in your mouth. This beer is around 10% ABV so in no time, you'll be plenty hammered, quite possibly on accident. 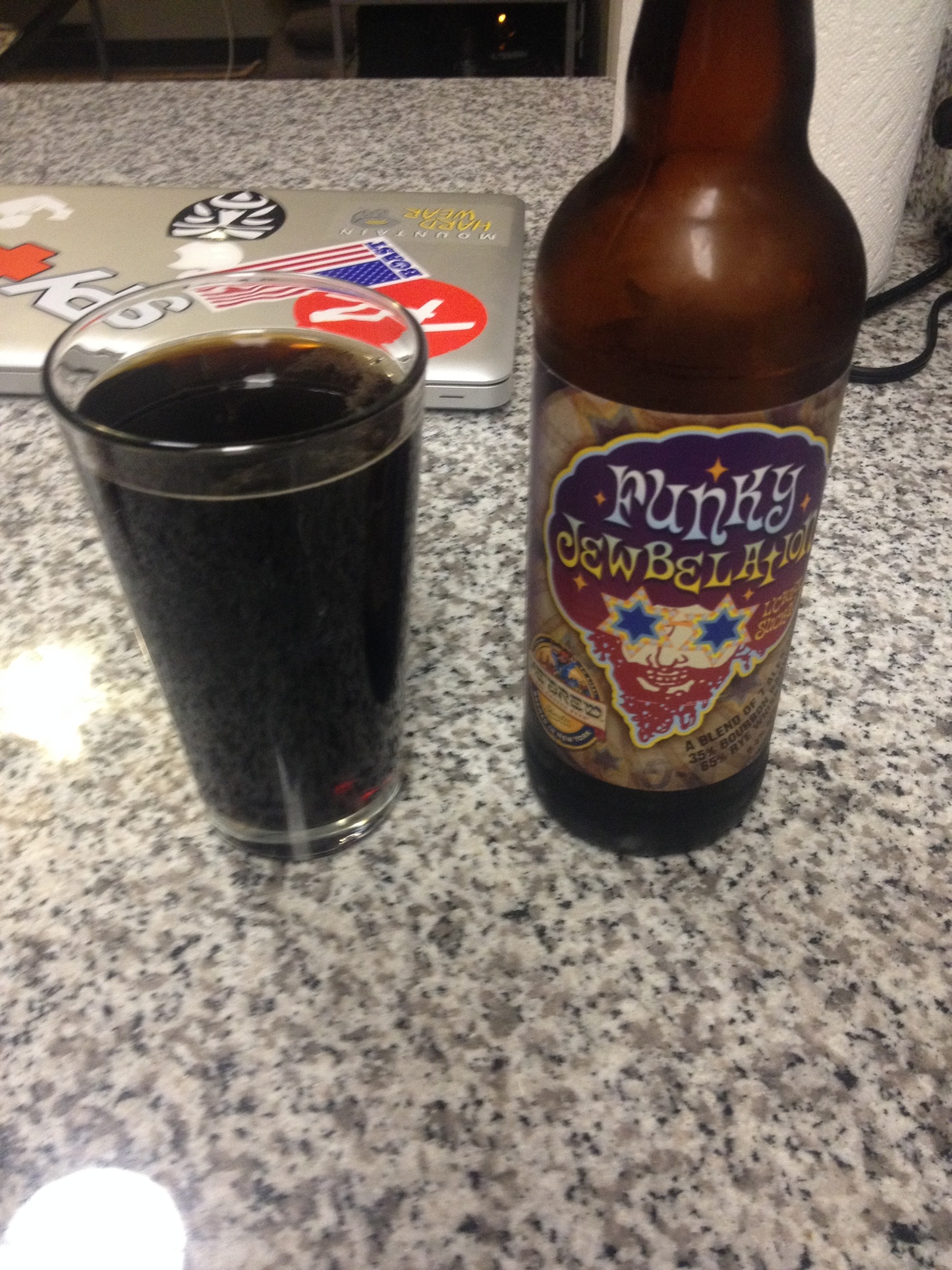 Pictured: Beer and my laptop

Hollywood and I finished our visit by grabbing some sliders from the food truck that was parked outside of the brewery. And then it was off to church. Best. Mass. Ever.

Jimmy Fraturday thinks you should visit Shmaltz at 6 Fairchild Square, Clifton Park, NY and check them out on the web. You probably won't email me cuz no one ever does.