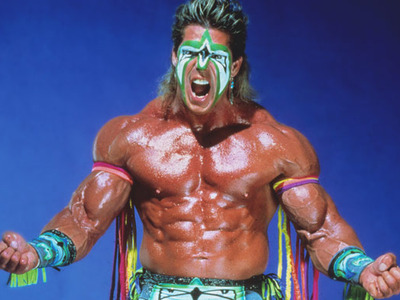 In Memoriam: The Ultimate Warrior
Matt Stoke
May 05, 2014

This week, Dudefest.com will pay tribute to a recently departed dude who epitomizes what it is to be dudefest. The man we will discover today is none other than The Ultimate Warrior.

You know him even if you don’t know him. Conjure up any image in your head of a Professional Wrestler from the '80s or '90s in your head and The Ultimate Warrior will immediately come to mind. Born James Brian Hellwig (an already dudefest last name which he subsequently improved, more on that later) on June 16, 1959. He was billed as being from “Parts Unknown.” In reality he was from Indiana. He attended Indiana State University for a year before deciding that bodybuilding held more appeal than skool. He moved to California where he won some minor bodybuilding competitions. In 1985 a group of Bodybuilders invited him to join them in their quest to become Professional Wrestlers. Hellwig gave up Bodybuilding and his plan of becoming a chiropractor (without school?) to join them.

In 1986, he debuted the name Dingo Warrior and that year won the WCWA Tag Team Championship (with a different partner than The Blade Runners). In 1987 he joined the World Wrestling Federation (WWF) and became The Ultimate Warrior. Between 1987 and 1989 he appeared in a series of Westway Ford commercials where he obviously was not used to even nearly his full potential.

The Ultimate Warrior was known for his high energy ring entrances where he would run full speed into the ring before shaking the ropes violently up and down. His face paint became a defining trait of The Ultimate Warrior. The Warrior won his pay-per-view debut at Wrestlemania IV. He continued his rise in popularity winning several large matches in the ensuing years including The WWF Intercontinental Title. At Wrestlemania VI he beat Hulk Hogan to win the WWF World Heavyweight Championship title and retain his Intercontinental Title, the only professional wrestler to ever hold both simultaneously.

Due to contract troubles, Hellwig left WWF in October of 1991 only to return to rescue Hulk Hogan in 1992. At this time a suspicion arose that The Ultimate Warrior was not Hellwig, but someone different. The Ultimate Warrior had different hair, a different physique, and new ring gear. Some claimed that Hellwig had not returned and others that he had died. Nonetheless, the man beneath the face paint was still Hellwig.

Hellwig wrestled throughout most of the 90’s retiring in 1998. On April 5, 2014 Warrior (as he was known once he LEGALLY CHANGED HIS NAME TO WARRIOR) was inducted into the WWE (formerly WWF) Hall of Fame. Two days later he gave a speech declaring, “Every man's heart one day beats its final beat. His lungs breathe their final breath. And if what that man did in his life makes the blood pulse through the body of others and makes them believe deeper in something larger than life then his essence, his spirit, will be immortalized…I am Ultimate Warrior. You are the Ultimate Warrior fans. And the spirit of The Ultimate Warrior will run forever!" Less than a day later, April 8, 2014, The Ultimate Warrior died. This week, Dudefest.com remembers the legendary Ultimate Warrior.

DOZEN
Dudefest Dozen: Most Useful Fingers
Matt Stoke, Smigoversen
gravytrain
I was once told that this guy was on steroids. I wonder if he actually was, or my grandmother was lying to me.
Dudes