Penis Is Our Middle Name
SELECTIONS FROM THE DUDEFEST GUYDE 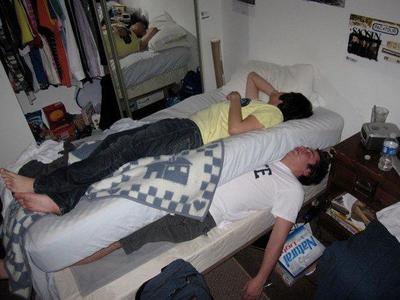 Congratulations! You’ve successfully convinced another human to spend 5 to 12 hours of confined unconsciousness next to you, every day, until one of you moves away or dies! Way to go! Yes, what you thought was going to be an awesome never-ending sleepover turned out to be a gross trust exercise that you keep failing, with a lot less Mario Party and a lot more body-Tetris than you’d hoped. Sharing a bed with someone is like sharing a condom: what works great for one person gets very messy when somebody else comes in it. That being said, here’s a guide to help you make sure you’re counting sheep instead of ways to effectively dispose of your bunkmate’s lifeless body.

Welcome to the mother fucking Thunderdome: time to establish your predatory niche in the kill-or-be-killed arena of bedroom cuddles. If you share your bed with your significant other, maybe, just maybe, you can find a mutually beneficial snuggle arrangement. If not, somebody has got to be little spoon, and you’d prefer if it were someone else—just another of nature’s sad truths, like how most baby sea turtles are eaten before they reach the ocean, or how bees inseminate their mom. To ensure that you’re the ladle and not the teaspoon, be sure to hoard the covers throughout the night. In response to the cold, your opponent will probably go fetal to retain heat: that’s when you strike.

Mr. Sandman’s kryptonite, snoring is the soft sleeper’s worst nightmare, other than the one where you show up to school naked and all your hair and teeth fall out and billions of insects eat your skin. There are many ways to remedy your bunkmate’s sleep apnea—a hilarious mouth guard, stupid-looking nasal strips, whatever the fuck this is—but all of them are difficult to convince someone to wear. As such, be sure to collect sufficient video evidence before approaching your afflicted bedmate, and nag constantly until your demands are met. If you’re one who snores, then fuck that: you’re not going to wear that ridiculous shit, that's what earplugs are for.

Sure, in a lot of ways, sleeping next to someone else seems pretty amazing. It’s cheaper, you get to hang out in bed, and if you’re with your S.O., you probably have more sex (married couples, ignore that last one). But all that goes out the window once you realize that your bed is a Petri dish filled with mucus and lies. “Oh, don’t worry, I’m not sick; I just have allergies,” your plague-addled bedmate murmurs. That’s like saying “I’m not lonely; I just have fifteen cats.” Find some Emergen-C, grab a sleeping bag, and go anywhere else. If you are asked to run errands for your incapacitated domestic partner, do the bare minimum; then, when you inevitably fall ill, remind your roomie of your benevolent deeds.

After much deliberation, Hot Carl has realized that his spirit animal is probably an ostrich.

OPINION
Vending Machines Are The Most Out-Dated Technology
Joe Kennedy
truckdaddy
I'm never gonna sleep with someone else! I'm gonna sleep alone for my entire life!
skeptic
I don't believe you.
Guydes