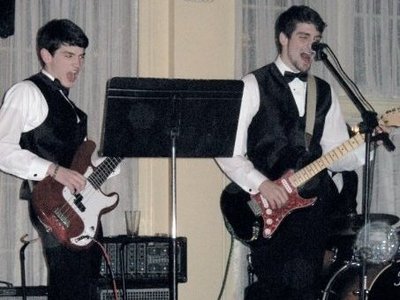 Getting Laid at Your Sister's Wedding
Pete Hall
May 04, 2014

So your sister's getting married, your weird aunt with the hair on her upper lip is on your back about when you're going to tie the knot, and you are the only single person left in your family (except for your Fake Uncle Steve who just went through his fourth divorce and has been at the bar since before the ceremony). You know you're going to drown your sorrows in alcohol during the reception, but you also want to know if there's a way you'll be able to wet more than just your whistle. Well, you're in luck, because this advice is free (caveat emptor; you get what you pay for).

This requires the most groundwork, and if you're already reading this article in the bathroom of the Holiday Inn ballroom while crying into your beer, then it's much too late for you to attempt this course of action. Plus, if you're dating someone, or have someone in mind that you know would come to your sister's wedding with you, you're probably already getting laid. And if you somehow haven't hit that already, you're pretty much already in by bringing her to your sister's wedding. You'll be wearing a suit, she'll be all dolled up, and booze will be flowing. If you manage to fuck this one up, there is literally no hope for you.

This is the second most difficult to attempt. Bridesmaids are like cheerleaders: stereotyped by Hollywood as the hottest and most desirable chicks, but in reality, they're average-looking at best, kind of weird, and you're most likely related to at least one of them. If you luck out and there is a hot, single bridesmaid that has genetic information independent of yours, well...she's probably out of your league. My advice is to pass on her and go for an easier target—someone older or less attractive, but hopefully not both. However, since you're a loose cannon, you're definitely going to try for this chick anyway. Prospects are low at family events and you'll have to lock down whatever you can find.

Your sister's bridesmaid is one of her closest friends, and she's probably known you as long as she's known your sister. Which means she's seen you and your sister fight, and she's heard you say some mean stuff. Yeah, you didn't mean it, but fights between siblings get pretty heated, regardless of who's around, and if we're being totally honest your sister probably deserved it. Sometimes, though, this can be an advantage. Maybe Bridesmaid has also seen your nice side; maybe she's seen you go through a tough breakup and she comforted you when you cried. And maybe you can pretend you're a sensitive, caring individual long enough to fill her with the perfect amount of booze to make that drunken mistake, while expertly hiding that deep down you're actually kind of a scumbag who's dead inside. Anyway, good luck with that, because no matter what happens everyone (Bridesmaid, the other bridesmaids, your sister, your mom) is going to be pissed at you in the morning. But you know what they say:

This is the easiest course to take. But, again, this is a tough place to get laid, so that's like saying Nolan Ryan's changeup was his easiest pitch to hit. A friend's wedding (or a random wedding, if you can pull that off) is possibly the easiest place to slam some strange, but family events make everything tougher. Since you've ruled out all the bridesmaids, you need to settle on the gazelle that has become separated from the rest of the herd. And that is most likely your sister's friend that wasn't asked to be a bridesmaid.

She's not as close with your sister, so she might not know about all the terrible shit you're capable of. She thought she was going to be asked to be a bridesmaid, though, and she's upset that she wasn't. She still felt obligated to go to the wedding, and she cleans up pretty nice. Plus, she's been hanging out by the bar alone (Fake Uncle Steve passed out in his car over an hour ago) all night, so you know she's good and sauced. And, best of all, her alcohol-clouded judgment has convinced her not only that you're a halfway-decent-looking guy, but that sleeping with you is the best way to get back at your sister for the perceived slight. Go find the coat check room and toss the attendant a twenty to leave you alone for a few minutes. She'll be tired after, so it's best to just let her sleep it off in there, where it's dark and quiet.

Your sister's a popular girl, and she has a lot of friends that weren't asked to be bridesmaids—and the open bar still lasts for another forty minutes.

Pat Holland doesn't even have any sisters and therefore definitely hasn't tried this twice. Don't try to email him.

Quick question: is this a Guyde to getting laid at my sisters wedding or Pat Holland's sister's wedding?
Joe Kennedy