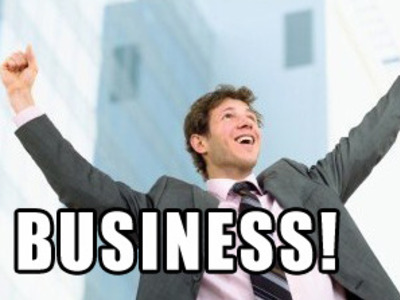 So you’re finally sick of living at home, being unemployed, and watching TV with your mom all day. Congratulations! You’re becoming a real adult. Lucky for you, I have provided the definitive guyde to getting out of your parents’ house and into the cold, unfeeling real world in which you will inevitably die. Fun!

So obviously, you’re going to want to get your own place. But first, you’re going to need a job, because you’re not technically living on your own if you make your parents pay your rent. You’re still living under their roof, because they pay for it, just in a different location. So go buy a fucking tie, exaggerate the shit out of your résumé, and get yourself some interviews.

Now, getting the interview is the easy part. Everybody looks good on a résumé—that’s where the expression “looks good on paper” comes from. So they toss out the idiots that weren’t smart enough to lie on their résumés and call in every other chump to meet face-to-face. This is where they separate the men from the boys, the lady-men from the lady-boys, and the sheep from the office (because sheep don’t belong in an office building, that would be ridiculous). If you can hold your own in an interview, you can convince your boss and your coworkers that you’re actually doing your job, and you can continue to cash those paychecks every two weeks until you remember that working sucks and move back home.

You already bought a tie and learned how to tie it for a reason, so this is the part where you put it on. Hopefully you didn’t need me to tell you that you were going to wear it to your interview. If you did, try not to mention that during the interview, as it makes it painfully obvious that you are a fucking moron. Anyway, walk through the door with confidence. I know this can be tough, because you likely have no idea where you’re going, and once you finally find the place, have no clue who you’re supposed to talk to. So I recommend arriving fourteen or fifteen hours early, just to get a feel for the place. If the sun’s already shining when you show up, you might as well just go straight home because they’ve probably already hired the nocturnal go-getter they’re looking for.

Since you’re in a dark, unfamiliar neighborhood and office parks can be surprisingly spooky at night, try every door to the building you can find. If you’re lucky, they’ve left one open for you because they could tell by your résumé that you were the perfect candidate. Just go on in and sit at any desk you choose—that one’s yours now. Congratulations! They’ve probably left a computer and framed pictures of some jabronies with a few kids. Those are your welcome gifts, so feel free to toss them into the trunk of your car. They’re bound to be worth something, and if I were you I’d drive right over to the sketchy part of town with all the pawn shops, payday loan places, and stores that offer check cashing (including those pawn shops and payday loan places) and unload them as fast as you can. That, my friend, is your first paycheck.

If the doors are locked, they’re testing you. The smart move is to be an innovator, since that’s a buzzword you probably included on your résumé. Find something heavy that’s not bolted down and toss it through a window—any one will do—and follow the above steps. Remember, anything easy isn’t worth doing. If there are no visible windows, or you can’t find a suitable smashing device, curl up in front of the door and take a nap. It’s the middle of the night, and you’ll need all the sleep you can get if they’re expecting you to actually navigate the interview. By sleeping right in front of the door, you’re pulling a power move by ensuring yours is the first face they’ll see that day, forever associating you with the office and therefore guaranteeing you will be their next hire. Also, you force them to wake you up, which makes them feel like they’re being rude and immediately puts them on the defensive. That’s the weak thing to be on, so they’ll be warm silly-putty in your hands (but not on the carpet because that shit never comes out).

During the actual interview, you don’t have to answer any of their questions without your lawyer present, so the safest thing to do is stay quiet. If you absolutely must talk, keep them on their toes by answering everything with more questions. Keep your questions basic: where is the bathroom, what is my starting salary, where do you guys keep the cleaning supplies, what’s the deal with the receptionist? (She single?) Since an interview is a give and take, the interviewer will be required to answer your questions (they aren’t allowed to have lawyers) and you’ll learn all the necessary details about the job. Try to keep them talking, but some of these people are experts and they’ll pull their own power move to put you back on the same level (mostly because they’re intimidated by how badass you look sleeping on a cement step) by getting you to give them information about yourself. This can’t be avoided all the time, so make sure you memorize your résumé verbatim and recite that as your answer. Remember, everyone looks good on paper, so make yourself look good in person by being your paperself (but not in like a Flat Stanley-Paper Mario kind of way).

At this point, whatever really old guy or moderately attractive cougar is interviewing you (there is no in between) will be so impressed by you that you won’t be leaving that office without a job offer. No, seriously, say that—these people are used to the cut throat world of business, so tell them you will not leave their office without a firm offer. Just as they open their mouth to speak again, cut them off and tell them to double their offer, no matter what it is. That’s another power move, bro. Get up, shake their hand, and say you’ll start next month. There’s no need to start right away, you’ve worked hard enough to deserve a pre-work vacation, and you’ve got a trunk full of valuable parting gifts to unload.

Before you leave, walk over to the receptionist and tell her about your exciting new job opportunity. She (they’re always women, because women are biologically suited to receptionisting) will obviously be incredibly impressed, and more than willing to take that quickie in the bathroom that you’re suggesting. After nailing your interview, you can’t not nail the receptionist, so even if she’s a landwhale (around 65% of receptionists) you gotta roll her into the bathroom and do unspeakable things to her unspeakable parts. It’s all part of your power moves, because now she’ll let you know where to find the good paperclips.

Pat Holland has a job now, so clearly this advice works. Don't try to email him.

This was like a two for one article! Get a job and laid! Wow, what a great country we live in
thebigd
I always prefer being interviewed by a moderately attractive cougar because they're less boring. Old guys always seem like the interview is the last thing they're going to do before they retire.
Guydes