What Else Are You Gonna Read While Pooping?
SELECTIONS FROM THE DUDEFEST GUYDE 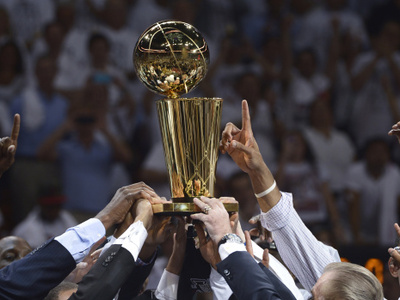 Ever since the Miami Heat pulled off an improbable Game 6 victory in the 2013 NBA Finals, I have been hoping for a rematch this year. And on Saturday night, Tim Duncan made my dreams come true. For the first time in the franchise's history, the San Antonio Spurs are in the NBA Finals for consecutive seasons. They get to match up against the reigning two time champions, the Miami Heat. The same Miami Heat who employ LeBron James, the best basketball player on the planet––the same Miami Heat who have only lost 1 playoff series in 4 seasons. Both teams are a year older, but everyone agrees the Spurs got better in the offseason. I would love to go on about both team's but Tim Duncan will qualify for a senior citizen discount if I don't hurry up. Without further ado, here is the Dudefest Guyde to some of the X-Factors that will influence the series.

The Fountain of Youth

This is Tim Duncan's sixth Finals appearance. His first one was 15 years ago. What kind of blood magic sacrifice is he performing to still be this good at 38 years old? People forget that he played 4 years of college ball before going #1 in 199-freaking-7. Rumor has it that during the offseason he just swims and bikes, doesn't even pick up a basketball. You can't just swim and bike all day; that doesn't leave enough time for sacrificial offerings to Kareem Abdul-Jabbar, the pagan god of hoops and all-time NBA points leader.

Just kidding, I have plenty of comments. D-Wade is amazing at getting away with hurting other players. He throws more elbows, discrete kicks, and wet willies than anyone in the modern NBA. He is healthier now than he was last year, but that could end at any second. Wade's game has become inconsistent while Duncan is just as effective as ever. Now I'm starting to suspect some voodoo on the Big Fundamental's part... I'm getting off topic. Wade is going to hurt Manu Ginobili at some point. And he's going to get away with it. You heard it here first.

Chris Bosh is a Wizard

Specifically, he is Harry Potter because sometimes he throws on his invisibility cloak and vanishes from entire box scores. And then other times, like Game 6 against the Pacers, he busts out the Elder Wand and scores 25. Wizards are fickle, and wizards that are half-ostrich like Bosh doubly so. Chris Bosh is like a box of Bertie Bott's Every Flavour Beans, you never know what you're going to get -- but whenever you feel safe, it's going to be booger flavored.

Remember back when LeBron couldn't play with his back to the basket? Then he developed an insane post game that obliterates galaxies? Yeah, you know the one. That fact is the very reason Boris Diaw's substantial ass is so important to the Spurs success. He's so solid (read: "fat") that you can't back him down. San Antonio's GM used the same reasoning as OKC employing Kendrick Perkins almost exclusively to defend Dwight Howard. Boris is a smart passer and can knock down three pointers – if he can draw his defender out to the three-point line, Tony Parker and Manu will have more room to get into the lane for layups (Manu), floaters (Tony), and kick-outs to their shooters (too many to name). The insane thing is that Diaw won't even be the primary LeBron defender, he's an insurance policy thanks to the Spurs fleecing Indiana for Kawhi Leonard by trading them George Hill.

Joey Crawford is a Loose Cannon

Who the fuck is Joey Crawford? I'll tell you, he is the most unpredictable ref in the universe. And for some reason is always on hand to make a controversial call at critical moments in the season. Does it sound like I'm overreacting a little? Maybe reading into things a little bit too much? Well, do you remember the time that Crawford ejected Timmy for laughing on the bench? I do. You never know when he's going to put a team on his back and fuck up your day with a bizarre ejection or double technical. Keep an eye out for this guy, you never know when he'll strike next.

I could go on, but if I did I would have to use numbers and stats. No one wants that, they want the sexy headlines. Well, I'm all out of those. If you want more, you'll just have to watch the Game 1 in San Antonio on Thursday at 8 pm.

Smigoversen is a Spurs fan. If you want to tell him how unbalanced his article was, he can be reached by email here.

SCORE
The Score: A Fantasy League of Ice and Fire Rookie Watch
Smigoversen
The Jocker
HEAT IN 3 I'M CALLING MY SHOT
Matt Stoke

Hey Jocker, The series is a best of 7 so it takes at least 4 wins to clinch the title.
The Jocker
NAH DUDE IM STILLL SAYING HEAT IN 3! D-WADE BABYYYY
thebigd
D-Wade gonna give em The Big D HEYOOOO
Jimmy Fraturday

The NBA is still a thing? I thought Donald Sterling bought it so he could keep it all for himself.
Marlon Brambo
sumthing about that comment seems wrong..........
Guydes