Plagiarizing Wikipedia, Plus Dick Jokes!
LETTERS TO THE DUDEFEST FORUM

I'm kind of a scumbag. I hit on women in inappropriate places, I lust after cartoon characters, and sometimes I steal stuff. And that's all as a mature, responsible adult. (In this context, you must understand that I fundamentally do not understand the definitions of those three words.) I admit I am a scumbag now, but I was even worse in college.

I went to college in Ithaca, NY. Maybe you've heard of Cornell University? Yeah, I bet you have. I went to the shittier school next door: Ithaca College. While there, I drank too much and treated women like objects. This is a story about that!

This story takes place on Halloween 2011, my senior year of college. It is important that you know that I fucking love Halloween. It is my second favorite holiday, after Christmas. Christmas is the goddamn tits. I was dressed as a low budget Hobbes, and my freshman buddy was dressed as a similarly low budget Calvin. We were drinking heavily (because it is the nature of the holiday), but we were all of legal drinking age because I graduated college in 1976. 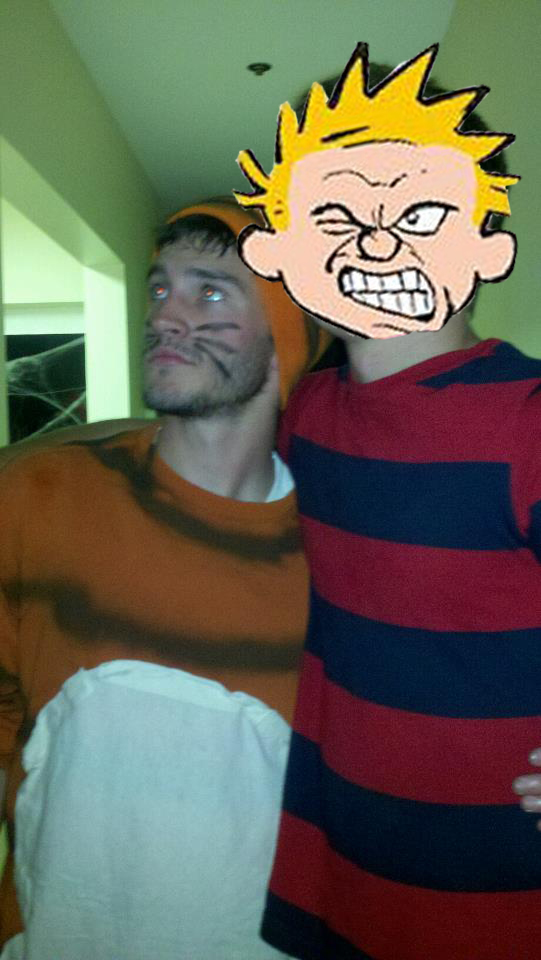 The party isn't the important part of this particular story. Hell, it being Halloween isn't even that important, I just wanted you to picture me with whiskers drawn on my face and a sweatshirt that reeked of spray paint. Suffice it to say that we got hammered and stayed in character throughout the night.

Once the party inevitably got broken up by the campus police that follow the swarm of misguided, party-less freshmen from house to house, we moved to a friend's apartment, because why stop drinking? That friend, who was dressed as a priest, went out for a cigarette and Calvin and I went with him rather than stay inside his apartment like a couple of weirdos. While he was smoking, two girls dressed as Mario and Luigi walked by across the street. Father O'Drinkin shouted, "Hey! Come here!", and surprisingly, they did. Luigi and I got to talking, presumably about how we were both sidekicks. While I was telling a most-likely hilarious story, Father O'Drinkin interrupted me by saying to Luigi, "You should make out with my friend."

I looked at her and said, "You know, it would be rude not to." So there we were, standing in front of my friend's apartment, two perfect strangers in mediocre, thrown-together-from-the-thrift-store costumes, making out in front of our friends. After a while, I said, "Would you like to go back to my apartment and see what's good?" Those were seriously my exact words, by the way, and she went for it.

I won't bore you with the details—that's just gross—but sexual intercourse was performed. I say "performed" because performances can be just okay, and that's all I can hope for with this particular activity.

Like the gentleman I am, I said, "Hobbes is good," rolled over, and went back to sleep.

Obviously, we never saw each other again.

Pat Holland still doesn't know her name, actually. If you think this story is about you, email him.