Alright, Pockets. I get that you think it’s cool as shit to hate on soccer. But the fact is, the World Cup rules, and it’s the reason why I love to spend one month watching soccer every four years.

I do want to say that if you are an American and you insist on calling it “football," you are a gigantic douchebag. You are being contrary because you think it makes you cool. It doesn’t. People in different countries, even countries that speak the same language, have different words for things. That’s how language works. Americans call it soccer, other countries call it football. Football refers to a very specific sport here in the US, one that is distinctly different from soccer. You don’t fill your gas tank with “petrol," you don’t get a burger with a side of “chips," and you don’t eat Lay’s potato “crisps." Just because something is European doesn’t mean it’s automatically correct.

The only thing that could possibly make you sound douchier than insisting on saying “football” all the time is calling it “the beautiful game." All the fucking time. Yes, “the beautiful game” refers to soccer. Everyone knows that. That doesn’t mean use it as a synonym all the time, guy in my office. You sound like an unbearable asshole right now. It’s like calling the NFL “the most popular sport” all the time. (“Did you catch the most popular sport game last night? Yeah, those Eagles sure can play!” -You, you douche.) Yeah, you’re not wrong, you’re just an asshole.

Despite the douchebags that surround the sport, and the monumental dickery/corruption that is FIFA, watching the World Cup rules. I like soccer, but not enough to follow it all the time. Let’s face it: the MLS sucks because there aren't any fans, and it has no fans because it sucks. I don’t give a rat’s ass about the English Premier League because this is America, and in 1776 we decided once and for all to stop caring about whatever dumb shit England was doing. I ignore all the other world soccer leagues because there are like a million, I wouldn’t even know where to begin watching them, and they are entirely irrelevant to me.

As far as the lack of scoring: I like soccer better than basketball. I like that one goal can be the difference in a huge game, and that’s why it’s so exciting when goals do happen. I try to explain this to people, and they ask me why I don’t just go watch baseball if I like boring stuff. Then I tell them I’m also a huge baseball fan, and they shut their dumb idiot mouths.

Everybody loves an underdog. It’s why we like ROCKY, and ROCKY II, and ROCKY IV, and ROCKY BALBOA. It’s why I love rooting for the US Men’s National Team, and it’s why I’ll watch soccer for a month every four years. Yeah, I’m not gonna turn on the international friendly when FC Barcelona and Manchester United are in town, but I’ll endure the company of douchebags to watch the US squeak out wins against better teams.

But I believe. I love this team, I love these dudes, and I could write an entire novel on Clint Dempsey alone. I won't, because you'd never read it, but here's an excerpt: 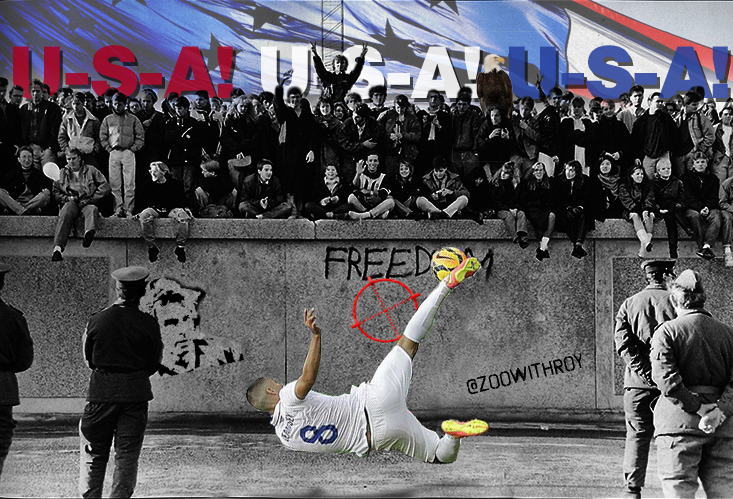 Source: I Want to go to the Zoo with Roy Halladay

How it actually happened.

Captain Fucking America scored the could-have-would-have-should-have-been game-winning goal against Portugal with his (probably massive) dong. Literally just fucked it into the net. Without it, we would have ended up losing to those communists.

Is it weird that I kinda wish I was that ball?

Dempsey is the obvious choice for Dudefest Dude, and not just because his last name is Dempsey (which is Dudefestese for "Hard-Body Motherfucker With The Heart Of A Killer," probably). He's a hard fighting, hard kicking, World Cupping son of a bitch, and if you kick him in the face he will only become more powerful than you can possibly imagine.

Eye on the ball!

And that's why Clint Dempsey and the USMNT are our Dude of the Week. Now go beat those Belgian commie bastards.

SCORE
The Score: A Fantasy League of Ice and Fire Rookie Watch
Smigoversen
Kevin
Is it "US Mutant Ninja Turtles?"
Dudes