Alright, morons. You've been reading my advice for months now, and apparently you're still having trouble getting your asses laid. I would say that it's your own fault, but... but nothing. It's your fault. Clearly, we're going to have to take desperate measures here: you need to find chicks on the internet.

Specifically, Tinder, which is a free app you can download to be connected with girls in your area that pretend Tinder is for something other than drunk hookups. In order to maximize your luck, you'll need to follow some pretty specific steps.

Go download the app. This should be self-explanatory, but since you're failing repeatedly with my perfect advice, I can only assume you were unfortunately born without a brain.

The first thing you're instructed to do when you open Tinder is connect it to your The Facebook account. "Don't worry," the app says, to assuage your fears, "we never share anything publicly." That doesn't mean they aren't collecting and selling absurd amounts of data about you, though, because that is exactly what they are doing. They're building a massive database on every single person that uses the app, presumably to know which white dudes are weirdly into Asian chicks. (Hint: it's all of them.) But you don't give a shit, as long as you get laid. So you link that shit, sign away your life by "reading" the Terms and Conditions, and start choosing your photos.

Obviously, most people are only going to see your first photo. In fact, a recent study by the Kennedy Research Center found that 68% of women using online dating services made their decision based on the first photo alone. To get bitches to swipe right, you have to lead with your absolute best photo. Most people will pick something where they're wearing a suit, or in a beautiful location. Those people are idiots, because anyone can just buy a suit.

You're smarter than that, so go with a candid shot. This lets women know you look good all the time, and that even on your worst day, she'll be impressed by how good you look. 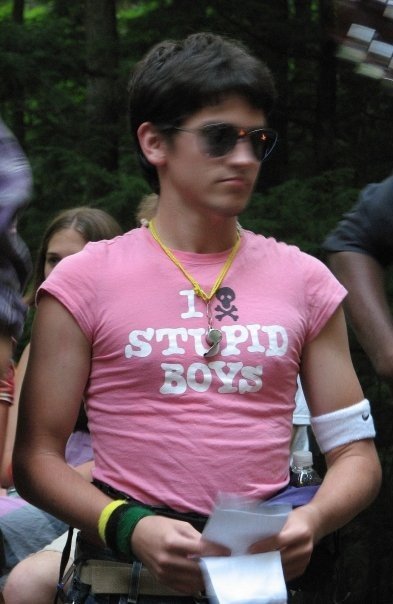 Women love a man that knows how to accessorize.

I know Tinder lets you pick up to six photos, but after a gem like that, you probably don't need any more.

Alright, odds are you aren't able to lead as strongly as our mysterious, hypothetical example. And if that's the case (it is), you don't do yourself any good by adding more photos of yourself. If you're ugly in one photo, you'll still be ugly in six. Chicks know this, and if they see a dude with only one photo, they're swiping that shit left faster than they can say, "Ew this dude is ugly and he only has one photo so I bet he's even uglier in real life," because that is a long sentence to say.

The pro move here is to add a bunch of group shots, with moderately attractive people. Not too attractive, or else you'll stand out like a sore thumb with a really ugly guy's face on it. Find (or stage) some photos of you with your at-best medium looking friends, hopefully taken on a low-quality camera from far away in low light, and throw them shits on there. 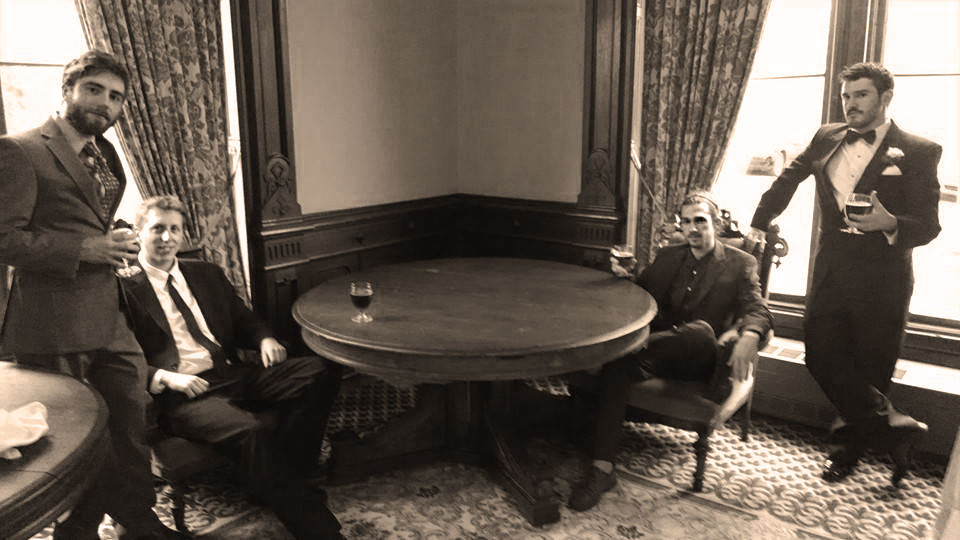 Oh yeah, filter the bejeezus out of it too.

You're gonna be the ugliest dude in the photo, but maybe they'll mistake you for one of your friends.

If you somehow manage to get one of these ladies to view your entire profile, don't flatter yourself, because it was probably by accident. People think the description doesn't matter because most people don't read it. Those people are mistaken, because some people will accidentally read at least some of it. The real Tinderellas are found by adding a kick-ass, can't-lose description that will suck them right in. 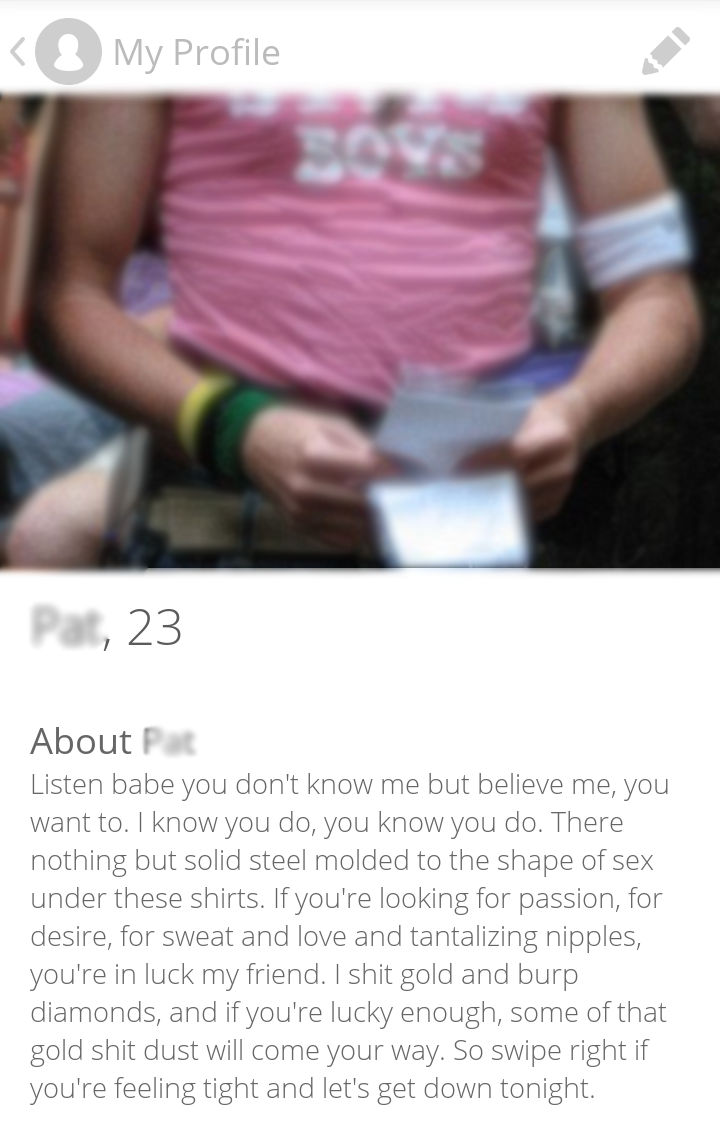 Confidence is the best accessory.

At this point, you're probably finding that you don't have any matches yet. That's because you're not done reading the article, idiot. Seriously, meet me halfway here. Although a big part of it might be that they can tell you're clearly a big dumb moron, and you can't fix stupid.

Anyway, I promised you some Tinder booty, so we're going all out here. Change your settings to just fucking everything. 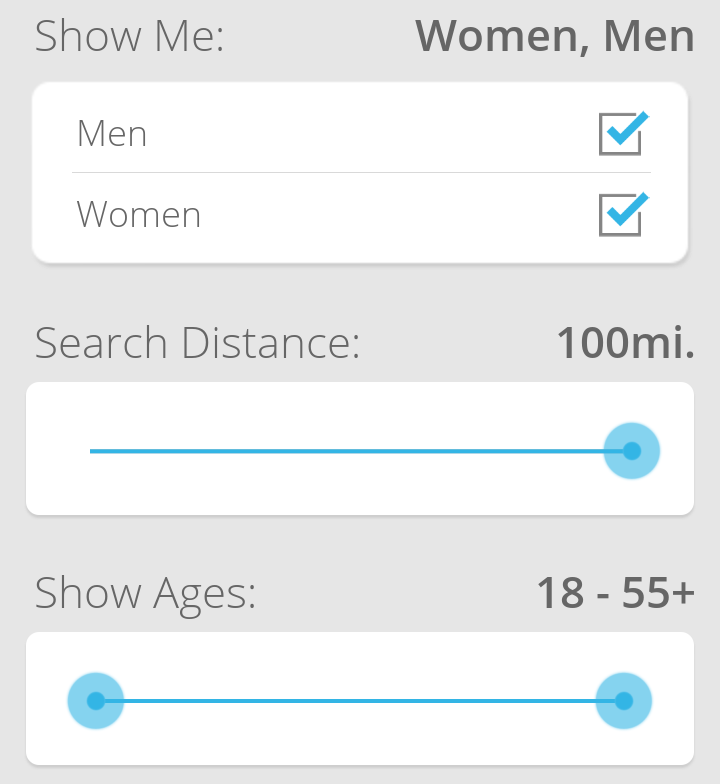 What you'll be fucking: everything.

If you're anything like the totally fake dude I made up for the purpose of this article, you're still looking at a big fat zero in your matches. Luckily, Tinder was made for people exactly like you, and it delivers. 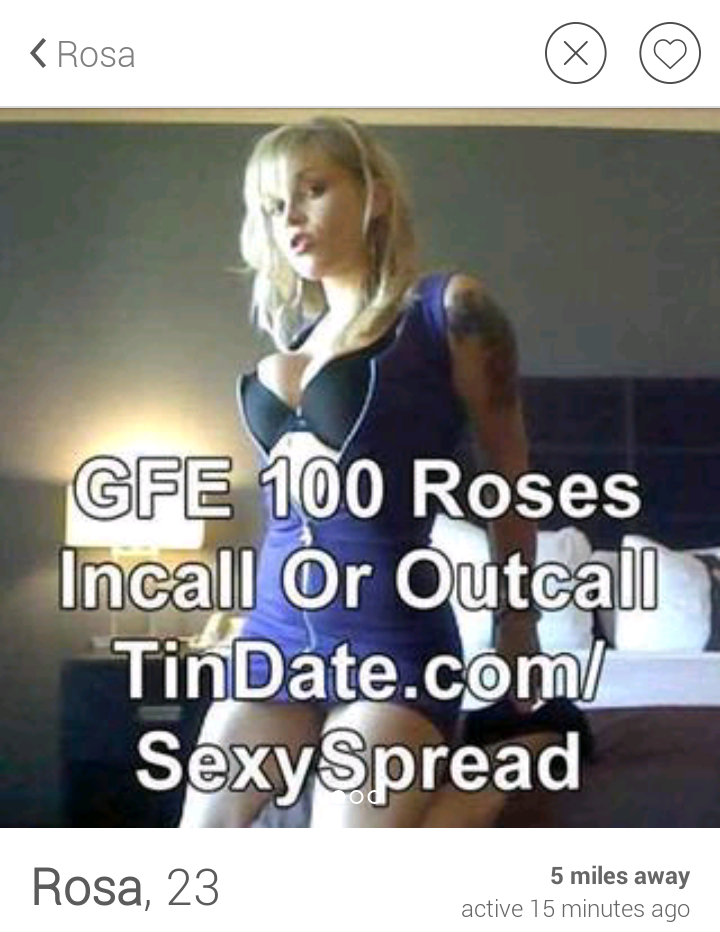 Seriously, does it ever fucking deliver. Literally -- that's what "Outcall" means. It's a delivery service for vag, the Papa John's of Pussy. What's better than a hooker coming right to your door? You don't have to go outside and face the judgmental stares of literally every person that sees you. They can sense the shame on you.

Roses are expensive though, so maybe you'll be able to find one that takes dollars. If you wanted to give someone gifts in exchange for sex, you would have a girlfriend, not troll Tinder for prostitutes. Your mileage may vary. 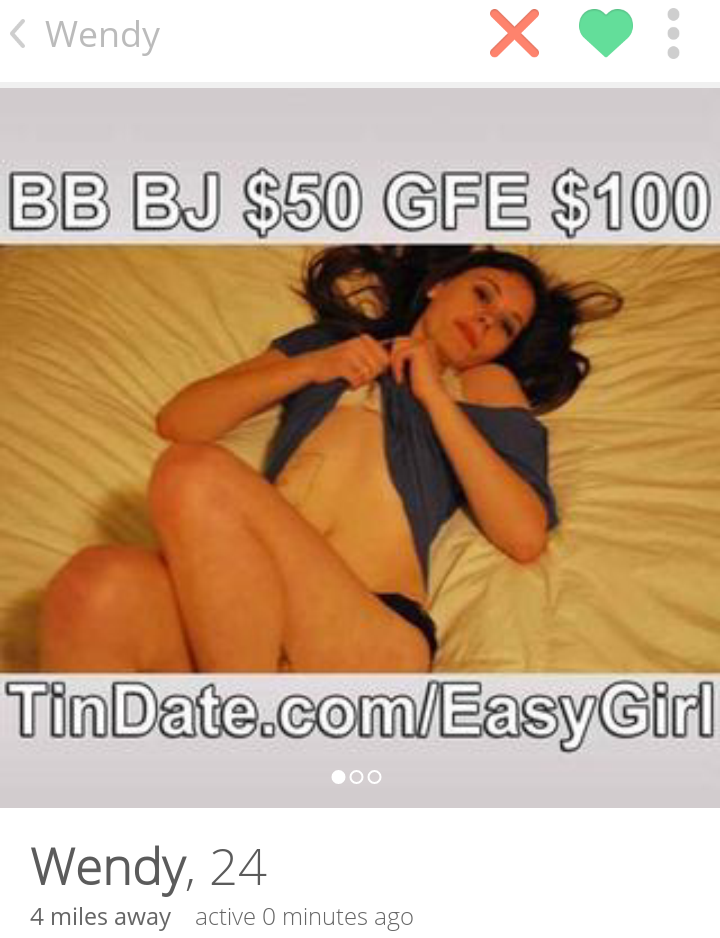 I had to Google most of those acronyms. It was...unpleasant.

Oh shit! What do you know? There you have it. Good thing these hookers pop up all the goddamn time, or you'd have to go outside to interact with women like some kind of barbarian. Now you have to choose between the likes of SexySpread and EasyGirl, and if I have to tell you which one is the correct choice, you're even dumber than I thought.

Actually, you probably are much dumber than I thought, so let me spell it out for you: EasyGirl sounds like a girl that you'd actually want to sleep with, and maybe have a chance with. SexySpread sounds like a weird brand of margarine for sex-starved housewives. Obviously, go with SexySpread.

You had sex on Tinder. Now you should probably see a doctor.

Pat Holland can't use Tinder; he doesn't even have a smartphone. That's why he doesn't receive email.