Better Than Getting Socks for Christmas
THAT'S JUST, LIKE, YOUR OPINION, MAN

Before this article begins, we need to remember that a young driver has lost his life. A truly horrific outcome that impacted everyone involved. We at Dudefest.com send our condolences to the families and friends as well as the race teams of Tony Stewart and Kevin Ward Jr.

By now you’ve more than likely heard multiple accounts of the incident at Canandaigua Motorsports Park in Central New York. For many people it’s impossible to even fathom how this could have happened, but it is important to analyze the events that occurred in order to draw a better understanding from it. We’ll start that off by taking a look at the environment.

The most obvious factor worth noting would simply be the time of day. This was a night race. As anyone who has driven at night can tell you, there is reduced visibility whenever you’re driving in dark conditions. Canandaigua Motorsports Park is very famous for being a darker track, and while they have spotlights around the track, it at best illuminates the racing surface for the drivers and at worst is ineffective.

Compounding this deficiency, Ward Jr. was wearing a black racing suit and helmet. There were no reflectors or bright colors to help him stand out against the track surface. He was utterly camouflaged against the dark track and would have been near impossible to see while driving past - unless you knew to look for him.

Even if this race had taken place during the day, visibility would be reduced because the winged spring cars used in these races also have visibility limitations on the periphery of the vehicles. 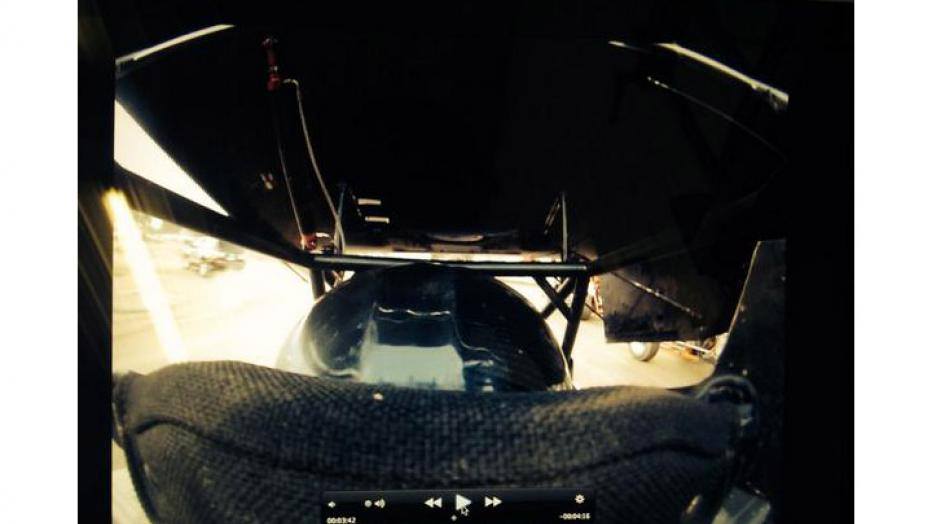 Above is a picture taken from the cockpit of one of these cars. While the top of the driver’s helmet is visible, there’s not too much more gained at eye level. The large wing on the roof extends down on the right side to help with downforce, but limits visibility. Out of the front of the car is a small section between the engine block and top of the wing. That little window is even more obscured by the mesh material used to try and keep dirt and debris from entering the cockpit.

When Kevin Ward Jr. exited his vehicle and moved toward Tony Stewart's was not different from what many other drivers do to express dissatisfaction with other racers. It’s not rare at all to see a driver exit their vehicle to display their displeasure, but they’ll almost always remain very close to their car. Where Kevin Ward Jr.'s actions differed is he started to bound down the track at Stewart’s car. Most experienced drivers know to stay low on the track when a car is parked, but when a driver leaves that area it becomes a guessing game as to where the safest area to drive is.

Because this was not a NASCAR sanctioned event, Stewart didn’t have the voice of a spotter telling him that Kevin Ward Jr. was getting out of his car. Stewart had no idea that when he came around that corner, Kevin Ward Jr. would be looking for him. Stewart had no time to quick swerve out of the way when the black silhouette of Ward Jr. emerged in the contrast of the dark track. Stewart had no way to expect the unexpected given the time from the wreck to the time of the incident.

A lot of media personalities as well as Internet commenters on articles are very quick to blame Stewart completely, but you have to understand that all of this happened in less than 60 seconds. From my perspective, this was an accident that could have been avoided if Ward Jr. had kept his cool and stayed by his car. On the other hand, if this had been a higher profile race there would have been more stopgaps to ensure safety in the form of an extended pit crew. Tony Stewart would have had more warning because a spotter could have seen Ward Jr. and informed him to take evasive action. This is of course giving Stewart the benefit of the doubt and presume innocent intentions.

Instead of playing the blame game, we as racing fans should take a minute to reassess the culture of our sport and work towards avoiding incidents like this in the future.