We Have A Slushie Machine
LETTERS TO THE DUDEFEST FORUM 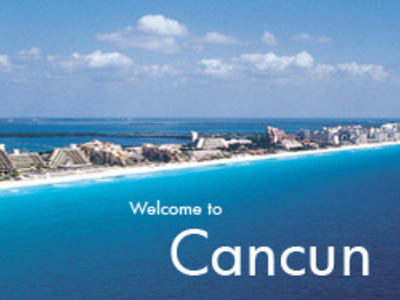 Thoughts and Experiences About Cancun, Mexico
Jimmy Fraturday
May 03, 2014

I went to Cancun, Mexico for spring break a few years back. The whole trip was a blur and I couldn't put it into a linear narrative, so here are a few of my thoughts.

On lawlessness and there being no rules except for Mexican Club Justice:

Every night my friends and I would leave our all-inclusive resort to go spend stupid amounts of money (for Mexico) at different bars or clubs in downtown Cancun. It was a short cab ride down to the war zone that was downtown. I’m not sure if there was ever a time when the streets were not overflowing with wasted college kids. On this particular night we were going to see LMFAO (I must have been blacked out to agree to go) at the largest club in Latin America. This place was called The City, and for good reason. It looked inconspicuous but big from the outside. The inside was literally like a small arena. It was 4 stories tall including the bottom floor which extended to the stage area. There were bars literally everywhere you looked. I only ever found one bathroom and it was so covered in vomit, piss and shit that I was almost embarrassed for the place. Then I remembered it was Mexico and I got over it.

I lost my buddies a few times and the show was about to begin. I was on the second level and decided that I might as well just post up near one of the balconies so I could watch the performance. I found an open space across from a staircase that led up a level and was marked VIP. There were two gigantic dudes guarding the stairs so I gave it plenty of space. Not long after the performance began (it was awful, mostly them not singing and pouring expensive liquor on marginal looking girls), a very drunk guy wandered up to the two bouncers guarding the VIP section. The drunk guy tried to walk right in and was pushed away. He then tried to shout at the bouncers that he was VIP. I knew he wasn’t, he knew he wasn’t, and most importantly the bouncers knew he wasn’t. Just when I thought he was going to leave he tried to sprint past the bouncers. The larger of the two bouncers grabbed his wrist and held his arm out straight. He then pushed very hard on the guys elbow, breaking his arm. The drunk guy immediately started writhing in pain and was picked up and carried off by the huge bouncer. I nearly shit myself and then scurried away to get away. Fucking Mexico man.

On my first bikini contest:

There was another night, at another club. And this one was advertising “Wasted Wednesday Bikini Contest” or something stupid like that. Anyway, we went with a group of Tri-Delts who were also from our school and were also down in Cancun. Because we had such a big group, we were able to get discounted tickets and a table with bottle service. Just as an aside, don’t ever get a table in Cancun. It gets you literally nothing special and you’ll spend more money feeling like you’re cool when really no one gives a shit. Anyway we got drunk off of this bottle service until we ran out of mixers, and they wouldn’t give us more (fuckers). It was about that time that the club had found enough drunk chicks to do the bikini contest. The club was set up with a stage in the middle and a cage surrounding it like at a UFC fight. One by one girls strutted around in tiny bikinis trying to get the crowd to cheer. After the first 8 or 9 went, the crowd needed more so the first really slutty chick to get up on stage took her top off to thunderous applause.

Now every girl who really wanted to win had to compete with that. It eventually turned into the male MC of the event getting a whole bunch of free lap dances. One chick took her top off and was draping it over him when he took it out of her hands, lassoed it a few times before tossing it into the crowd. This poor girl was now topless for the rest of the night. And she didn’t even win.

Jimmy Fraturday has never lost a staring contest. Ever. You can direct your hate mail to him here.