Best Taken In Article Form
SELECTIONS FROM THE DUDEFEST GUYDE 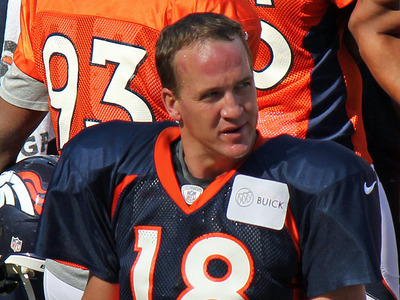 The NFL playoffs are a big deal for me. Naturally, it would make sense that the Super Bowl would be an even bigger deal. I have watched every one since I was six years old, and each one stands out in my memory for its own reason. Like watching John Elway, an all-time great who never had the supporting cast necessary to break through to the summit of the NFL, come through in a thriller over another great, and one of my favorite athletes of all-time, Brett Favre. Or seeing my arch-nemesis, Tom Brady, get pummeled by the Giants defensive line and come up with the greatest big game choke in sports history. I have been pumped for this year's Super Bowl since the playoffs began, and seeing the two best teams from the regular season make it here, will make it all the better.

The Broncos are exactly the kind of team that the NFL wants to succeed based on all the rule changes in recent years. They throw the ball first, and ask questions later. Denver set all sorts of offensive records this season, including the most team points, most passing yards, and total touchdowns. The biggest reason for the offensive explosion in the Rocky Mountains is superstar Peyton Manning.

Manning put together the best regular season by a quarterback in NFL history, shattering Brady's single season touchdown record, narrowly beating out Drew Brees' yardage record and leading the team to an AFC best 13-3 record. If he's not a unanimous choice for NFL MVP, it will be a travesty.

Manning made his name as the QB of the Indianapolis Colts, leading them to their first championship since the days of the Baltimore Colts, and Johnny Unitas, and making them the winningest team of the 2000s. However, even when he was setting records in Indy, he never had such a complete team around him. Elway, today the GM of the Broncos, has done a remarkable job stacking the team with talent all over the roster, especially on offense.

As a member of the Colts, the best offensive weapons he ever had featured Marvin Harrison, Reggie Wayne, and Edgerrin James. Hardly chumps by any standard, but those three pale in comparison to the targets he has in Denver today. Demaryius Thomas, only in his fourth season in the NFL, has been improving with each game and can one day be one of the top receivers in the NFL. Wes Welker is the best slot receiver in the game, and Eric Decker is a clutch performer. Tight end Julius Thomas is one of the top breakout performers of this season, and the backs, Knowshon Moreno and Montee Ball are a fantastic one-two punch. Denver's defense has also played very well in the playoffs after an inconsistent regular season, forcing two of the best QB's in the AFC, Philip Rivers and Tom Brady to look pedestrian.

On the other sideline, is a team with a very different style of winning, yet they had just as much success this season. Seattle is more of an old school team that pounds the ball with Pro Bowler Marshawn Lynch, plays great defense, and wins the turnover battle.

Early in the season, Quarterback Russell Wilson led a prolific attack that racked up huge totals of points, enough to rival even Denver at times. However, the last few weeks, with his stud receivers Percy Harvin and Sidney Rice out with injury, the Seahawks have lacked the explosion they had earlier in the season, although they have remained efficient offensively by limiting turnovers and making enough plays to win.

However, Seattle is by no means an offensive team. Their M.O. all year has been to play great defense, and indeed they have. Ranked first overall in passing defense and total defense, as well as defensive interceptions, this Super Bowl pits strength vs. strength. Seattle's secondary is second to none, even with Brandon Browner suspended. Any defense that can play Drew Brees twice in one season and hold him to around 225 yards per game must be remarkably good.

Seattle's biggest weakness all year has been their offensive line, which has forced Russell Wilson to frantically scramble around the pocket looking for an open man. This was no more evident than against San Francisco last Sunday, when he was sacked four times in the first half, and was hurried and hit repeatedly throughout the game. This could be a major problem against a Denver defense that got good pressure on Brady at key moments last week, despite being without their best pass rusher in Von Miller. Wilson's misdirection plays, his pump fake and play action pass, are easily the best in the league, but Denver's defensive front is well coached and should be able to avoid over-committing.

This has the potential to be the best Super Bowl in a long time, and considering how good the last ten have been, that's saying something. All eyes will, as always, be on the Quartbacks, and I expect Russell Wilson to make some facepalm inducing plays, as well as some phenomenal throws, while Manning will continue to be Manning and wow everybody at MetLife Stadium with impeccable decision making and hyper efficient throws. Denver will attempt to spread the defense out with a lot of 3 and 4 wide sets, in order to open up running lanes for Moreno and Ball, while Seattle will likely lean on a power attack with pulling guards in order to set up play action.

Manning gets the ball, down six with two minutes to go, and leads the Broncos on an 85 yard drive, connecting with Wes Welker on a crossing route in the end zone with mere seconds left to play. Not a peep is heard out of Richard Sherman. Denver 24 - Seattle 23.

After Peyton Manning is injured early, and Brock Osweiler is too tall to play quarterback, Broncos coach John Fox is forced to pull in a former Broncos quarterback, Tim Tebow, who leads the Broncos from a five touchdown deficit to win on a 99 yard touchdown run on the last play of the game. Seahawks free safety Earl Thomas is awarded Super Bowl MVP after having four interceptions returned for touchdowns. Broncos 49 - Seahawks 48.

Naturally the Broncs start off with the early lead, maybe 10-nothing. But the Hawks pull it back with a turnover or two and two field goals and a touchdown to bring it to 13-10 at the half. Second half, Beast Mode turns on and the Hawks score on every drive they get. Seahawks 34 - Broncos 23.

Both quarterbacks fall flat early due to age (too young & too old), which forces both teams into using primarily run offense. That, in turn, sends Dick Sherman into a rabid, werewolf rampage of neck-biting. Halftime comes and goes and no one notices , as it turns out there is a homeless man making hilarious fart noises out in the parking lot. Starting in the fourth quarter, George Clinton touches down onto the field in Mothership Connection, boots out Roger Goodell and takes Peyton Manning up into funkenspace. President Obama, watching the carnage from the MetLife blimp just calls the game, gives Sherman five points and nukes the stadium to stop the spread of Sherman-werewolves. Seattle 5 - Denver 0.

A Seahawk and a Bronco probably wouldn't fight each other in the wild. So this one's a real toss-up. From a nickname standpoint I would give the edge to Seattle because The Legion of Boom secondary narrowly edges out Pot Roast Terrance Knighton. Final Score: Fun to Fun.

Peyton Manning throws for 100 yards... per pass, with 0 incompletions. Joe Buck still talks about how they need to run the ball more if they're going to be successful. All the pre-game talk about Russell Wilson's baseball past confuses him so much that he forgets what sport he's playing and throws fastballs high and inside to Broncos defensive backs. In a desperate move, Pete Carroll replaces Russell Wilson with a wad of his chewed gum, which rushes for a 98-yard touchdown. They miss the extra point. Feeling bad for the Seahawks, Peyton Manning hands the ball off to Richard Sherman, who runs it back 99 yards in the wrong direction for a safety. Final score: 107-6, Denver.

Due to a massive unexpected snowstorm hitting the New Jersey area, neither the Seahawks nor the Broncos can make it from their hotels to the stadium in time. Instead of delaying the game, the New York Jets and New York Giants (who I'm guessing are both just always somewhere in their stadium) are called in as replacements. Geno Smith is immediately injured and Mark Sanchez is brought in, creating an epic duel between him and a perpetually sad Eli Manning. Both quarterbacks throw for 400+ yeards, but all of those yards are for the other team becuase every pass is intercepted. The game ends with the dismal score of 0-0 due to the incompetencies of both teams on both sides of the ball. The Giants win on a technicality because Sanchez causes another butt-fumble, and no Superbowl-winning team should ever live with that shame. The MVP goes collectively to the refs for having to call this trainwreck of a game. Final Score: 0 to -1, Giants.

Lee Borden does not know what a byline is and thus did not write one.
Recent Athletics Articles

I predicted a safety, I think I win.
Ram Jam