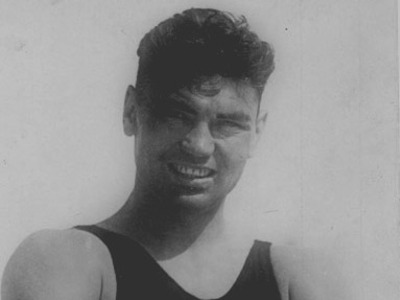 Let's talk about Jack Dempsey. Jack “The Manassa Mauler” Dempsey. This guy was a legendary boxer, and a dude’s dude. Hopefully you’ve heard of Jack, and if not, sit back, reexamine your life, and enjoy.

Dempsey was born June of 1895 in Manassa, Colorado. Both his parents were poor and Jack dropped out of school early to work. From 1911 to 1916 he was a wanderer, sleeping under trains and traveling from job to job. That’s right, old school bumming around the USA, sleeping under moving trains. In desperate need of money at this point in his life, Dempsey would challenge patrons at local saloons to fights. Other patrons would place bets and it was in this way that Dempsey began to fight for a living. Oh yeah, he never lost one of those fights.

Jack Dempsey started professionally boxing around 1914. In preparation for fights Dempsey would chew on tree sap, wash his face with vinegar and soak his fists in horse urine. This is the man who would later be Director of Physical Education for the Coast Guard. Dempsey had an aggressive style of fighting. Crowds loved to see his ferocious knockouts, many of which occurred within the opening moments of the match.

Boxing at that time had no rule against standing over your fallen opponent. Dempsey would knock them down and as they attempted to rise, beat them into submission until they lay a bloody, knocked out wreck on the floor and he was declared the victor. His fights prompted boxing to add the rule that a boxer who knocks down his opponent has to retreat to a neutral corner of the ring.

In 1919 Dempsey and World Heavyweight Champion Jess Willard fought for the world title in Toledo, Ohio. Many declared it to be a modern David vs Goliath. Our boy Dempsey was much smaller than Willard, the proverbial David. Who doesn’t like a good underdog story?

Well Willard got knocked down seven times in the first round and suffered a broken jaw, ribs and numerous fractures to his face. He didn’t make it past the third round. Dempsey took the title from him although many claimed that there was no way Dempsey could have inflicted that much damage on Willard without hurting his own fingers. They claimed that Dempsey had loaded his gloves. The claim was never substantiated. Just like A-Rod never did steroids.

Dempsey defended his title successfully five times from 1920 to 1923. The fights were, at the time, the most expensive in boxing history. On September 23, 1926 Jack Dempsey lost his title to challenger Gene Tunney in front of 120,557 people. He challenged Tunney again a year later, but lost in a unanimous decision. Dempsey eventually retired with a record of 60-7-8 with 50 knockouts. He was a movie actor, Coast Guardsman and he died in 1983 as one of the most dudefest dudes the world had ever seen. Or will ever see.

Matt Stoke doesn't know how he wound up here.

Are we titling these columns Matt Stoke's Monday Mancrush? I think it could be really successful
thebigd
Holy wow. Jack Dempsey was the man.
Dudes