Humor That Goes Down Smooth
FARGO (1996) 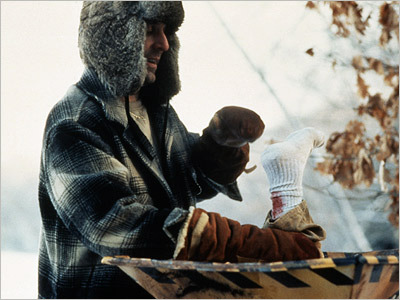 Oh, ya, I watched FARGO this week. Everyone in the film sounds exactly like Sarah Palin, which is simultaneously entertaining and homely. Maybe she modeled her accent after this film? Who knows. As with any Coen Brothers movie, FARGO is a dark comedy that is slow paced and real weird.

FARGO is set in Minnesota ya, where everyone is very friendly, helpful, and polite, don’cha know. The film opens to William H. Macy asking two criminals, Steve Buscemi and some other guy, to kidnap his wife so they can split the ransom. Buscemi, rocking the pedo-est mustache this side of a van at least 500 feet from a school, and the other guy accept the offer. So a few days later, the kidnapping goes down. Shit hits the fan almost immediately.

After the kidnapping, Buscemi, the driver, gets pulled over by the cops. The other guy kills the cop, and as Buscemi is disposing of the body, a couple drives by. This doesn't escape their attention and the other guy takes off to silence them. Somehow they crash, which is super convenient for him, and he kills them both. Buscemi: 0. The other guy: 3.

Cue Frances McDormand. She plays a local police chief and walking stereotype who’s in her early third trimester and constantly eating. She starts to investigate the three murders, using her small town ways and politeness to her advantage. She is at the level of a Law & Order detective in her investigative abilities. During her investigation, witnesses of the two criminals describe them in unhelpful ways, calling Buscemi weird looking, but in a non-descript way (which to be fair, is incredibly accurate), and calling the other guy big and older.

Buscemi is a bit more stressed out after the three murders, and tells Macy that he’ll be taking all the ransom money. Macy’s father-in-law decides that he’s had enough, and goes to deliver the ransom to Buscemi himself. Bad call pops. Buscemi, who was expecting Macy, kills the father-in-law, but not before the old man shoots him in the face. It just skins the cheek though, THANK GOD. Buscemi, officially unhinged and off the deep end, kills another dude on his way from the drop off point to bring the score to 3 - 2, other guy. Even more pissed, Buscemi goes back to the hideout and tells the other guy that he’s taking the car. Silent but deadly other guy who has killed the wife by then, is not amused, so he takes an ax to Buscemi. We don’t get to see it though, which means that the other guy is up 4 to 2.

Cue McDormand again. She discovers their car while perusing through the snowy countryside, and decides to investigate. She finds the other guy running Buscemi’s body through a wood chipper (5 - 2, victory other guy), and ends up arresting him. Meanwhile, Macy, who ran away like a little bitch when McDormand decided to investigate him, is caught in some shady motel where he was probably do some kind of pussy shit.

R A T I N G S
6.5
This movie is great, but there isn’t enough bromance (none), violence (some), or badassery (little) to bring it any higher than a 6.5, so that’s what I’m giving it.
Joe Kennedy
7.5
I'm not sure I agree with you a hundred percent on your police work, there, Kennedy- I disagree that there is only a little badassery. Margie (Frances McDormand) is easily the most badass character in the film, and she does it while incubating a tiny human being inside of her torso. She stands off against every bad guy in this film, most notably the other guy while shoving his associate into that woodchipper. She’s one dudefest lady.
Pete Hall
8
This movie is the greatest thing to ever happen to North Dakota.
Henry H. Henry
6.5
Gotta agree with Kennedy here. While this is a pretty bad-ass movie, its lacking a dudefest draw that most summer blockbusters have.
Evan Finkle
Recent Investigation Reviews