The Kickstarter to Rebuild the Death Star
EQUILIBRIUM (2002) 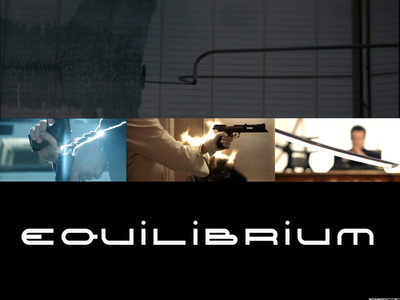 This movie is a fairly typical enactment of post-apocalyptic civilization. There is a fan, shit hits said fan, everyone freaks the fuck out about how shit covered the fan is, and then power hungry holograms rise and oppress the remaining humans. In EQUILIBRIUM, living up to the movie’s namesake, the new regime keeps balance (oppression) by drugging everyone and removing their ability to feel, maintaining a flaccid monotony of brainwashed lives.

Let’s start with a conundrum: the rebels, or “sense offenders” that feel things (which, in this movie, means… LETS TOUCH EVERYTHING), are the ones not shooting up. The unshaven, art collecting, Yeats-spouting, leather-jacket-wearing, quinoa-burger-on-my-roof-in-williamsburg hippies are keeping clear heads so they can enjoy their own existence. They just HAVE to be different. Turds. Regardless, the mainstream populace is hopped up on depressants so that they hate people that are having fun and must kill them.

Easily the most dudefest aspect of this movie are the action scenes. In the first scene, a bunch of these boob-fondling bohemians are holed up with a shit ton of art, recently found-out by the authorities. Just when you’re about to say, “ART?? I don’t even like Rembrandt’s portraits”, guns pop up everywhere, and the bloodbath you were expecting ensues. Christian Bale comes in, slides on a door, and kicks everyone’s ass. Afterward you see two police guys look at the carnage, shake their heads, and say “Damn.”

Side note: there are some well-placed shits throughout the film; and I mean the expletive, not real poop. Though the drugged-up populous aren’t supposed to have any emotion, every once in a while when Christian Bale is about to turn his guns into clubs and pound your face, they let slip a little “Shit.”

Bale is in a terrific bad-guy-turned-good role as a ruthless, mystical enforcer of the regime that is trained in what I can best describe as martial arts with a gun in each hand. It’s all the spinning, shooting and grotesque limb-breaking you would expect in a MATRIX fight scene. In the aforementioned gun-as-a-club fight scene, Bale hits every dude literally 47 times each. In EQUILIBRIUM, though, it seems like the writers attempt to explain his acrobatics with a short scene of numbers and angles and probability. Nice try. Anyways, Bale begins to find his inner emotions, and questions what it is that the regime is accomplishing, and how his whole life has been a lie. Cue Conspiracy Keanu. Christian Bale, in his seemingly un-dudely quest for emotion, cries over a woman, cries about Beethoven, gets all sweaty about a sunrise and lets a puppy lick his face. But, come on, he’s doing it to say eff you to the Man!

R A T I N G S
8
All in all; great action and an okay take on a tired post-apocalyptic theme, while effusing the idea that we all need to, like, feel and stuff, man.
Ram Jam
8
If you you took Ayn Rand’s Anthem and blended it with THE DARK KNIGHT, this is the movie you would get. Its confusingly both objectivist and Dudefest at the same time. Also some good sexual tension with the one chick in it.
Evan Finkle
8
A great post apocolyptic film. A sort of 1984 meets the MATRIX kind of feel, this thriller/action flick will satisfy your dude cravings. Fans of awesome slow mo and fight scenes will love this movie, as it is riddled with it.
Jimmy Fraturday
8.5
The DVD cover says “Forget the MATRIX!” I’m not sure what that means, because it’s almost completely irrelevant and certainly not a helpful review. In that vein, my review is complete.
Pete Hall
Recent Post-Apocalypse Reviews