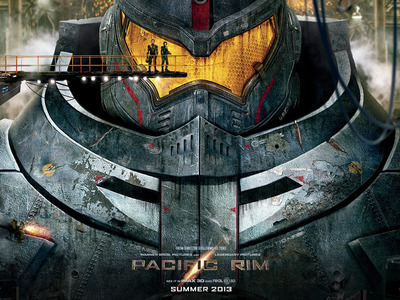 How about another dude: CHARLIE DAY. Yep, Charlie from Always Sunny is in this close-to-home altered-Earth movie that has it’s fair share of dudefest dudes, anthropomorphic mechanical giants, and gigantic alien monsters from the bottom of the ocean. In fact, Charlie’s character, Dr. Newton Geiszler, is hilarious, and very Charlie-esque, who provides a great foil to all the machismo that this movie is bursting with.

Let me start this already started review with an anecdote about cultural stereotypes, life, and the cosmos. Not actually any of that, but I had a quite funny interaction after I watched this movie. I had just finished watching PACIFIC RIM, and was walking through my architecture studio, when I noticed a classmate Harry ALSO watching PACIFIC RIM, so I asked him what he thought of it. Harry, who is from Taiwan, LOVES this shit; apparently it’s the fourth time he’s seen it this month. But then he justifies his infatuation with the harmless observation, “We asians really like this kinda story”

I feign incomprehension, even though I totally know where he’s going.

“I mean... like Godzilla sea monsters come up and attack humans”

Ahhhh, there it is. Everything made sense again.

Which leads me to the gist of PACIFIC RIM: it is, remarkably, a modern-day Godzilla Story. Only in this story, the Humans FUCK SHIT UP. The premise is that somehow, a trans-dimensional gateway has opened up on the Pacific Ocean floor, and starts spewing out monsters. These monsters terrorize the civilizations on coastlines around the Pacific (which has a colloquial name, i just can’t think of it...) and everybody is all like, “These fuckers are terrorizing us.”

(So, as ingenious and creative human beings, we put aside our differences and join together as a human race (pretty awesome) to combat these alien blue-green glob monsters. It’s actually pretty amazing how much the world just adapts and continues within the new status quo: Humans vs. sea monsters.

Now, I present the following path of logic: What do we do when our cutting edge weapons aren’t effective against any of these creatures? We come up with new ones. What Kind of weapon can we use (because, of course, we can’t play DEFENSE, we’re a fucking race of Dudes and Dudettes. Also, that doesnt work? BIG weapons, that can adapt, be re-usable, and put on a great show while everybody’s Cities are being thoroughly dismantled. What does a need for bravado, smarts, resiliency, and a knack for showmanship call for? That’s right, 50-story Mech Warriors controlled by a human brain, called Jaegers.

So, Harry, I love this shit too; and it’s because I’m a human, and you’re a human, and there are qualities that we possess (and cannot be replicated) that are PERFECT for fighting alien Sea Monsters from another dimension. So lets jump In a Jaeger together and beat on some globby, radioactive chameleons. We can talk about how much this idea rocks the whole time.

Don’t pee yourself when you see Godzilla.

R A T I N G S
9.5
So yeah, great story, I’m totally buying the Human qualities over monster will of destruction plot line. The dialogue seems a bit obvious at some points, and the British accent of Stacker Pentecost (Idris Elba) is excruciating at almost all points, and the blond fuzzy shit on Raleigh Becket’s (Charlie Hunnam) face makes me want to vom. Seriously, i guess they wanted him to look like my 15 year old cousin, rather than a damaged and rugged underdog Jaeger pilot.
Ram Jam
9
I normally get pretty bored of giant robots fighting giant monsters, but this movie some how kept my interest.
Evan Finkle
6.5
Giant robots beating up giant monsters was awesome. Dr. Charlie Kelly was awesome. I also liked that Raleigh and Mako don’t have to talk about how they’re totally gonna bone because they shared brains. And then boned.
Pete Hall
8
I wanted to watch giant robots fight giant monsters, and dammit, these guys delivered.
Henry H. Henry
8.5
This is a fantastic date movie.
Scrooge
Recent Rampage Reviews