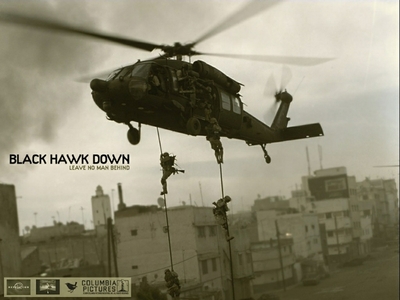 BLACK HAWK DOWN is the prototypical late ‘90s/early 2000s war movie. It’s got a bunch of grimy, dirty, identical-looking white dudes with crew cuts and 5 o’clock shadow in BDUs, and a three word title. There were seriously like a hundred different dudes in this movie and we have no idea who any of them were. We definitely recognized Josh Hartnett (that guy from PEARL HARBOR) and Ewan McGregor (the shittier Obi Wan Kenobi), but that’s about it. Seriously, any of the other guys in this movie could run over your dog, steal your wallet, and hand you a mug shot, and you still wouldn’t be able to pick him out of a lineup. Excellent casting choices, Ridley Scott.

This movie starts out with war being fucking miserable, and then war continues to be fucking miserable for 150 minutes, and then the credits roll. At that point, we learned that Tom Sizemore was also in this movie. And then one minute later, after tabbing over to IMDb and entering his name, we remembered why we recognize his name- he was in SAVING PRIVATE RYAN too. And oh shit, Eric Bana (remember the shitty Hulk?), he’s in this too. Fuck. Why do all white people look the same?

Anyway, war looks fucking awful and remind us to never, ever, ever, ever do it. This movie is fucking intense, and the dudes got each others’ backs and - spoiler alert - there is no man left behind (they say that about six times in case you forgot how many men they were going to leave behind). What makes this even more ridiculous is that this shit actually happened. Which is fucking terrifying.

It’s a pretty standard war movie, based on a true story. There’s a lot of action, gunfighting, explosions, helicopters, and dudes yelling. The action editing is pretty decent, as you can actually tell what’s going on most of the time (even though it’s still impossible to tell who anything is happening to). It even won the Oscar for best Film Editing, which is really cool. Good for you, BLACK HAWK DOWN.

Yo, sidebar: if you read the entire cast list, like everyone is in this fucking thing: Jeremy Piven (Ari Gold), Tom Hardy (Bane), Ty Burrell (the dad from Modern Family), Hugh Dancy (Hugh Fucking Dancy), even fucking Orlando Bloom. Our theory is that since there are about 250 named characters with speaking roles, the studio had to hire literally every male actor in Hollywood. Extras don’t cut it for Ridley Scott, apparently- everyone needs to be a B-lister or higher to be in this film. We’re surprised we don’t get Steve Buscemi or Christopher Walken in this thing, cause those dudes are in everything.

So, yeah, if you haven’t seen it yet, it’s pretty much exactly what you think it’s gonna be. Not bad, not a waste of time to watch. We fully intended to end this review with a BLACK COCK DOWN joke, but honestly it was just so hard that it wouldn't fit in.

R A T I N G S
7.5
A pretty standard, but well done war movie, so it gets an average score. Grit, action, explosions, and emotional death scenes. Also, there are zero chicks in this thing. I don’t remember seeing a single female on screen except for the one time one of the many, many dudes has a photo of his wife and kid. Dudes on dudes on dudes.
Pete Hall
8
This was the very first war movie I ever watched, followed closely by SAVING PRIVATE RYAN. As Holland puts it, this was a pretty solid war movie. None of this strong female intelligence officer that’s all the rage these days. Nope, just a bunch of dudes killing other dudes.
Jimmy Fraturday
9
As much as this seems like it could be just another dudefest movie-lots of action, cast list comprised of almost all B-list action stars-it surpasses that and manages to be a gut-wrenchingly emotional movie. And it all happened in real life. See it.
Matt Stoke
8
I spent the whole movie being like "Wait, I recognize him", and "What other movies is that dude in", and "Oh that's that guy from that thing", so I have no idea what actually happened in it.
Joe Kennedy
Recent Rampage Reviews