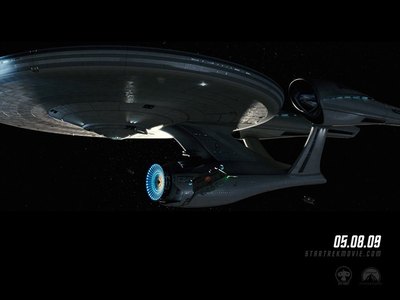 STAR TREK is indeed a return to the original Star Trek series, of which my father was a big fan. Holland (“they’re NOT zombies, just people that eat your flesh after coming back from the dead”-Holland) will be quick to remind you, however, that this ISN’T a sequel, a prequel, a neequel (the Neeson-sequel), or a reinterpretation of the former series; it’s an alternate storyline. As I take it, that means free rein for J.J. Abrams to make up whatever he wants, governed only by the impending fury of Trekkies everywhere should he fuck things up too bad.

Abrams does well, though. This film has been updated with modern special effects, an interesting storyline, and crazy fast-paced action, and is thus made 100x more awesome than original Star Trek movies. I’ve watched my share of STAR TREK II-VI (thanks, Dad). Though they are great classics (remember when they slingshot around the sun??), and I have missed a whole lot of TV series’ and movies made in the 80’s and 90’s, I’m going to say that the rebooted Star Trek is just way more goddamned entertaining.

The story showcases the two dudes most beloved in Star Trek history: James Kirk and Spock (played by Chris Pine and Zachary Quinto). The film starts out by confusing everybody with a flashback of George Kirk (James’s Father) battling a gigantic Romulan spacecraft from the future. For at least five minutes, everyone thinks it’s supposed to be James Kirk (at least I did). He dies defending his fleeing crew members, just as his son, James, is born in an escape vessel. Damn good dad right there.

The next two bits explain how Kirk and Spock grow up to be the younger, more volatile versions of the older guys we are familiar with. Kirk, appropriately, is a rebellious youth with a drinking-hitting-on-women-and-taking-punches-like-a-champ problem. Thankfully, Captain Pike (Bruce Greenwood) saves his face, sees his dudefest potential, and convinces him to join Starfleet. On the way up, he befriends Dr. “Bones” McCoy (Karl Urban). Spock struggles with being half-vulcan, half-human; where the vulcan side of him wants to enter some Nerd School and not feel any emotion, and his human complexion just wants to beat up on haters and join Starfleet. He obviously does the latter.

The story skips ahead three years, with both continuing their careers in Starfleet. We assume Kirk has continued his unapologetic antics of womanizing (GREEN-womanizing), being great at things, and still not yet living up to his full potential. Spock is some higher ranking officer, and has a comparatively tight butthole. The two do not get along.

When Vulcan sends out a distress signal, all the new cadets suit up and head into space (Bones sneaks Kirk onto the Enterprise). When Kirk realizes it’s an identical situation to the battle that killed his father he goes apeshit and totally weiners his way into the command room. He turns out to be right, the big Romulan future-ship is there sticking a big dick in Vulcan. The Romulan captain Nero (Eric Bana) is all like, “In the future Spock destroys my planet, so I’m preemptively destroying his, nyah nyah” What a doucher. Kirk and Sulu (John Cho) are able to stop the big dick from spewing planet-eating semen with a pretty good fight scene, while Pike is held captive on the Romulan ship. Spock rescues some of the Vulcans, but no one can save the planet! KABOOM!

After that, Kirk and Spock spar with their penises about how to stop Nero, whose next target is Earth. Spock wins, because he’s the acting captain and Vulcan-death-grips the shit out of Kirk. Kirk is marooned on a planet that happens to have BOTH a Spock from the future AND Scotty (Simon Pegg), the engineer. No fucking way, right? Spock explains all the angry-Romulans-time-warping stuff (thank GOD)(please just watch the movie, so I dont have to explain it here) and shows Scotty the equations he was eventually going to discover regarding beaming onto a moving vessel (what a dick, right?). Thus, both Kirk and Scotty beam aboard the Enterprise while at warp speed. That is a bigger deal than it sounds.

The ending of the movie is basically as such: Kirk and Spock unseemingly bond together as friends while they pummel some Romulan butt, save Pike and Earth, and EVERYONE gets promoted at least 5 positions in Starfleet. I mean they’re all like, 30 years old!

However, this does set the stage for other movies to come, as all our favorite dudes are now in position to rock the universe with their weird colored vests and catchy phrases. I can’t wait until Jayden Smith is billed as the black dude with the Cyclops-visor over his eyes. I know that guy wasn’t in the same century as Kirk and Spock, but hey, didn’t we establish anything can happen? How about Vin Deisel for the Klingon guy?

R A T I N G S
8
A solid Dudefest movie. Space, one scene of hooking up with aliens, explosions galore, and tons of dudes sitting in chairs. I think James Tiberius Kirk is a very dudely name.
Ram Jam
7
Yo, they aren’t fucking zombies, bro. They DO NOT come back from the dead. This isn’t even a discussion, you’re just wrong. That being said, LENS FLARE LENS FLARE LENS FLARE. The cockpit looks like the inside of an Apple store. The sexual tension between Kirk and Spock alone makes this pretty Dudefest, but in space? With explosions? Nice.
Pete Hall
7
Pretty sweet movie. I've always been more of a STAR WARS guy, but even I have to say I really enjoyed this one.
Henry H. Henry
7
Is Jar Jar Binks in this one?
Joe Kennedy
9
I'm just excited to see The Enterprise show up in the new STAR WARS. Alternate timeline means anything can happen. Don't tell me you've never wanted to see a group of Star Destroyers take on the Enterprise. Also this was a great movie.
Matt Stoke
8
Space movies, the final frontier for rebooting old franchises. Let's hope SPACEBALLS doesn't get the same treatment
Smigoversen
Recent Space Reviews

I believe "Trekker" is the preferred nomenclature.
Smigoversen

Like that game they used to play on Who's Line Is It Anyway? http://www.youtube.com/watch?v=HQG1ezZlY4c
Jimmy Fraturday

I've only ever watched this movie with no sound. So I had to substitute in my own version of the dialogue. It was definitely a great movie in my head.
Dudefest Movies
10 MOST DUDEFEST MOVIES