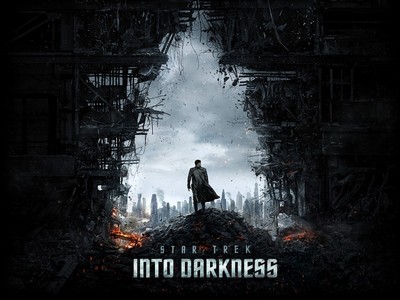 This STAR TREK reboot sequel is much the same as the first! Which is good. Because the original reboot is great. But, just so all 5 of you know, my Dad liked STAR TREK WORLD OF DARKNESS less than STAR TREK. Just so you know.

STAR TREK WORLD OF DARKNESS has a lot in common with the previous Star Trek movie: swash-buckling Kirk, soft-cheekboned Spock, a cool new villain and… space. The best parts of our favorite characters are reinforced, new bonds of friendship are formed, and viewers are provided with great action.

After an understandable opening scene where we are reintroduced to all the dudes we remember from the first reboot (Chris Pine as Kirk, Zachary Quinto as Spock, Karl Urban as McCoy, John Cho as Sulu, Simon Pegg as Scotty) and why they are a great group of dudes, there is a bit of confusing mush concerning a sick child, that takes a bit too long. Basically, a rogue Starfleet agent (Cumberbatch) blows a bunch of shit up and kills Commander Pike (Bruce Greenwood). Kirk and the U.S.S. Enterprise find him in Klingon space and take him captive.

SPOILERS GALORE Their captive’s name is Khan. Holy Poop, right? Khan is a three-hundred year old genetically engineered super-human that has been brought back to life by Admiral Marcus (Peter Weller). It ALSO turns out that the Enterprise is housing what remains of Khan’s crew, cryogenically frozen in torpedo warheads. Marcus forced Khan via threat of the annihilation of his fellow engineered super-humans to fabricate advanced weapons within the Admiral’s plan to start a Human-Klingon war. Khan was just a little bummed that he was getting treated so shittily, so he killed all those people, that’s all. WAY TO GO ADMIRAL, why the fuck would you wake him up and make him angry? Thus, the Enterprise has found themselves in a big , weiner-sized, pickle between Khan (bad, volatile) and Admiral Marcus (also bad, hot daughter).

When it’s clear that Marcus is nutso and will destroy the Enterprise to kill Khan, Kirk decides to team up with Khan (fabulous idea) to take out the Admiral. Once they neutralize the Admiral (actually Khan squeezes his face til he dies) and his ship Khan turns on them and demands the return of his crew. Spock pulls a little magic (from his human side, of course) and beams over actual warheads, NOT the super-human crew, and half of Khan’s ship is blown to hell.

The Enterprise, in its weakened state, is dragged into a freefall by Earth’s gravity. Kirk saves the day at the expense of his own life, but Khan follows in his wrecked ship on a collision course set for Starfleet Headquarters. It crashes, Khan lives to beat up on Spock, but eventually succumbs and is subdued by Spock’s anger over Kirk’s death. Bones (Dr. McCoy), however, injects Kirk with Khan’s blood to bring him back to life. Yeah, you weren’t too worried; what kind of a reboot would this be if Kirk died??

R A T I N G S
7.5
All in all, another solid Dudefest movie. It’s somehow less exciting than STAR TREK, I think because we aren’t meeting the characters for the first time, but it has alot of the same great qualities: space, bromance, explosions and guns, dudes in chairs, and a blatantly gratuitous hottie-in-lingerie shot.
Ram Jam
6.5
I liked the scene where Kirk is in bed with two sexy alien ladies with tails. I bet they did some WEIRD shit.
Pete Hall
6
I saw this one in theaters but it did not stand out. There were explosions and a volcano and Dredd in it.
Joe Kennedy
Recent Space Reviews

I remember there was a whole bunch of bitchy people complaining about the lingerie scene in this one. I have a one word response for them: DUDEFEST.
Dudefest Movies
10 MOST DUDEFEST MOVIES