Dropping Truth Grenades Because Truth Bombs Are Too Destructive
300 (2007) 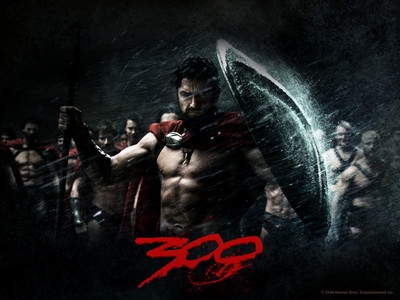 300 is a movie about King Leonidas, aka Gerard Butler (P.S I LOVE YOU - no wait - THE UGLY TRUTH, wait, shit, THE BOUNTY HUNTER, no… has this guy only been in rom coms?) as the fearless leader of a bunch of bloodthirsty Spartan soldiers in armored speedos fending off the Persian Empire in an effort to save their home. If you're one of the twenty people that hasn't seen this movie, then I should tell you that it's basically one extended, epic battle scene. Luckily, this kind of entertainment is right up our alley at Dudefest.com. There's lots of slicing and dicing at the hands of Leonidas and his men. And all of it is glorious. All of it. The battle is interspersed occasionally with scenes back at the Spartan's home base, or whatever, featuring Leonidas' wife, Cersei Lannister. These scenes are not important and I will not talk about them beyond this point.

The movie starts with some Spartan guy, because I'm pretty sure the only people with names are Leonidas and Xerxes (the gigantic Persian leader of ambiguous gender), telling the story of Leonidas' childhood. Basically all you need to know here is that the Spartans are badasses that love to fight, and Leonidas is just about the bravest fucker around. The movie really gets going when Leonidas kicks some guy from Persia into a bottomless pit or something like that. Just a little aside on this point, why is it that the first guy who dies in this movie is black? Kind of a shitty movie stereotype. Anyway, this basically causes Persia to invade Sparta, so Leonidas and his group of 300 men (Get it? It's the title!) go to repel them. A shit load of more fighting ensues, and the Spartans defeat everything that is thrown at them. Of course, Leonidas wouldn't be such a hero if he wasn't a martyr, so we know their time is coming. It comes in the form of Gollum 2.0, some horribly disfigured cripple who cockblocks Leonidas' rampage and helps Xerxes surround them. Leonidas eventually dies, along with the rest of his guys, but in that kind of defiant and fearless way that only the most Dudefest of all men could do. Oh, and by the way, he delayed the Persians long enough that Sparta won the war, so happy ending for all. Except for Xerxes. And the other Persians. And definitely Leonidas. And I guess Leonidas' wife and kid. Oh well.

If you can't tell yet, this movie is pretty fucking Dudefest. Sure, maybe it's less of a movie and more of an expensive excuse to show a bunch of guys killing hundreds of other guys with swords and spears, but isn't that exactly what we're looking for? It's just fighting, that's it. In fact, there are literally only two women in this entire movie, probably on screen for a combined ten minutes. It's just dudes killing dudes. One of my big complaints is that nothing looks real. Everything is kind of tinted, like it was covered in gold glitter shit. I know this is a selling point for a lot of people, but I just thought the visuals were a little over the top. But hey, that's what you get when you try to be loyal to the graphic novel, so no major points lost there. The other main one is that there's actually no suspense in this movie at all… I like myself some cinematic suspense. But, hey, fuck it, it's fun as hell.

R A T I N G S
8.5
If you don’t agree, then fuck you.
Henry H. Henry
8
It’s a good thing that Sparta doesn’t do elections, because Rapey McRapeface and the dude from PLAYING FOR KEEPS suck at their respective jobs. No wonder they both die. Politics aside, I give this movie an 8, because there’s lots of violence, and some of it is slowed down, so I can know exactly what’s happening in the scene. As a slow viewer, I appreciate that.
Joe Kennedy
5
I’m pretty sure the movie was 15 minutes long if you don’t count footage that was either sped up or slowed down for dramatic effect. I’m not really all that into muscle porn either.
Evan Finkle
8
Violence is really all this movie has going for it. With that being said, it might be the most beautiful looking violence I’ve seen in quite a while. Worth owning, so you can throw it on when you’re too hungover to do anything else.
Jimmy Fraturday
6
When I was in high school we watched pirated copies of this movie no less than 6 times in class. That’s not really relevant to the movie, similarly, the plot is not relevant to the movie either. I appreciate this film mostly for the sudden increase in Spartan War reenactors being available for parties. I can only imagine Civil War reenactors get pissed off when they lose business to those damn Greeks.
Smigoversen
9
Slow motion is great during football. Dudes murdering each other is awesome. Slow motion murder-dudes? Cinematic masterpiece.
Pete Hall
9
I'm imagining the gallons of vaseline they probably rubbed the actors with to maintain an impressive sheen of sweat over the entire film. Dudefest.
Ram Jam
3
I don't really understand the appeal of the comic-book-like style of the film, it takes away from the important historical aspects this biopic is attempting to represent. I'll give it a 3 for its gross misrepresentation of Hellenic Culture.
Matt Stoke
7.5
Super fucking dudefest. Only issue is that they gave control of the slow motion button to guy having a seizure. I think my sense of time got whiplash from watching this.
Bat Swinger
Recent Survival Reviews