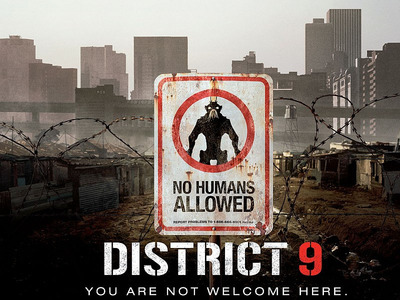 Before you read this review, it's important to know that I watched it with a lesbian couple who brought a teensy bit of weed for before the movie started. This may have influenced my very positive rating on top of the awesome and scarily realistic take on what would happen if a spaceship of aliens landed on Earth over South Africa and couldn't get back up to the Mothership. It's an elaborate metaphor for apartheid. Metaphors are Dudefest.

When the movie started, I had a lot of difficulty figuring out the main character's name. It's like Vickers or Wikus or something like that. If you spend too much time focusing on his ridiculous name, you can miss out on a lot of the exposition. The gist of DISTRICT 9 is that a species of aliens that bear a striking resemblance to crawfish arrive on Earth. For a little while, everyone was really chill and tried to hang out together. But then the Soufricans decide to start treating the aliens like shit. They call them names like prawns, make them eat catfood (which backfires, because it turns out the prawns fucking love eating catfood), and make them live in a ghetto that's called District 9. Just your run-of-the-mill rascism (species-ism?). Wikus is put in charge of relocating all 1.8 million prawns to a new segregated area called District 10.

So we see Wikus encounter blackmail, the drug trade, some gambling, even more interspecies prostitution, and finally cat food which is basically a drug for the prawns. After 15 to 20 minutes of alien relocation, weapon seizing, alien egg burning and what-not, shit starts happening for real.

The problem with the prawns, is the majority are dumb and hostile towards humans. One prawn has spent all of his time on Earth collecting fuel to power a rocket he has been hiding underneath his shack in District 9. He's trying to get back on the Mothership one broken alien iPod at a time. Wikus raids his home, finds the fuel and accidentally sprays it all over his face like a dumbass. He starts coughing and then an alien attacks him. Now he's got a fucked-up hand to go with his fucked-up fucked. At this point, Wikus has had enough and decides to go home for the day.

All of this took place during the first half hour. In the second half hour, Wikus's friends and family throw him a party to celebrate his new job relocating prawns. In classic movie fashion, Wikus starts violently vomiting and goes to the hospital. When he gets there, the doctors cut off his bandages and reveal that Wikus has a PRAWN HAND?!!?!?!?!?!?!?

That was the sound of military guys rolling in. They scoop up Wikus and take him to an underground facility and hook him up to a bunch of machines. None of these machines are to help Wikus feel better. The government only cares about using alien technology. Specifically alien weapons. For some reason, alien weapons can only be fired by prawn hands. Wikus is freaking out because he doesn't want to shoot anything. So the military guys keep shocking him until his trigger-finger fires one of the guns. He zaps a bunch of pigs and shit but then they bring out prawns. You know, just to see what happens when you shoot one with one of their own guns.

The next piece of bad news was that now Wikus was going to have his DNA harvested for further testing. Wikus was already pissed at that point and this was the final straw. He freaks THE FUCK out and breaks out of the lab and the facility. If I could type a downward spiral here, I would but the fonts aren't compatible. Wikus runs away while turning more and more into an alien. So the government is hunting him because he's becoming more valuable with every additional piece of him that becomes prawnish.

In the final act of the movie, Wikus teams up with the prawn from the beginning of the movie who got him into this mess in the first place. They finagle a way for the prawn to fly up to the Mothership and head back to their home planet. He promised to bring Wikus a cure for his condition. This surprised Wikus because he totally thought he was coming up until that point. That was probably the entire reason he teamed up with the prawn in the first place. Because he isn't a dick, Wikus still helps and the prawn leaves the planet. The last shot of the movie is of Wikus. Only he's not Wikus, he looks EXACTLY LIKE A PRAWN!!! oooOOOOooooOOOOoooo

R A T I N G S
7
Talk about casting right? The dude who played Wikus killed it. Also the prawn was pretty good. Realest alien movie I’ve seen in like . . . ever. Worth the 1:50 run time.
Evan Finkle
8
One of the best movies I saw that year. Not a great date movie. Expect a beej max if viewing with a female because the prawn stuff turns girls off.
Smigoversen
9.5
Seriously one of the best movies that came out that year, and fresh, original science fiction is in short supply these days. Interspecies dudes just bro-ing out is great, and Wikus turning into a prawn at the end is awesome. How cool would it be to hang out with your pooch all day and then at the end of the day you both get to be pooches? Sweet.
Pete Hall
8
How often do you see a sci-fi movie where the invading aliens are the good guys and the people are the bad guys? One of the best movies of 2009. I don't find the main character to be extremely dudefest, but Wikus comes around in the end.
Henry H. Henry
8
The greatest character transformation since HOW THE GRINCH STOLE CHRISTMAS and the greatest physical transformation since WHITE CHICKS.
Joe Kennedy
5
I left the theatre blind with jealous rage. How come only nerds get to turn into half alien freak hybrids? Where's my Cinderella story?!?!
Pockets
Recent Space Reviews