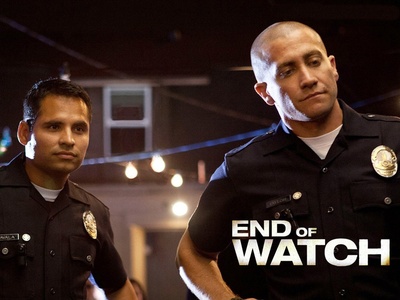 Have you ever been watching COPS and wished that it was longer and had a strong theme of deep partner camaraderie? Well, let me direct you towards END OF WATCH. And when I say this movie is like COPS, I mean it. I'll put it this way, if you were to turn this movie on fifteen minutes into it, you would probably think you're watching a more-graphic-than-normal COPS episode featuring an officer that looks a surprising amount like Jake Gyllenhaal. Depending on your personal interests or reservations about COPS or Jake Gyllenhaal, this could make you want to change the channel. But no matter what your interest in this movie has become, trust me. Keep watching.

After seeing END OF WATCH, I have to say I was surprised. I came into it thinking it was going to be just a movie about cops busting gang members in the LA ghettos. And don't get me wrong, it had plenty of that. There was some badass shit in this movie. I mean, some gangbanger stabs the ornery middle aged cop whose career stalled out in the fucking eye. But there's an element that flows through all of these scenes of fighting and shooting, and that's what is maybe the greatest bromance in cinematic history.

The two officers that are at the center of this movie are Gyllenhaal and a guy named Michael Pena, who should absolutely be in way more movies after his performance in this. They're partners and rising stars at the department/possibly only competent and ethical cops in all the LAPD (suggestions) that are assigned the terrible job of policing one ghetto in Los Angeles, and the movie follows them around as they stop crimes, save babies from burning buildings, and gradually unravel a major human and drug trafficking organization set up by a Mexican cartel.

While all of these scenes are intense, violent, and suspenseful, the relationship of the cops is always the most interesting thing going on. These guys aren't only partners, but best friends who would literally kill and die for each other. This friendship is what drives this movie, and it is simply the best partnership I think I have ever seen on film. I really don't know what else to say about it without ruining things for the viewer, so just take my word that it's well worth your time. Do you have a spare two hours? Good, go watch it now.

R A T I N G S
9
There aren't too many things I disliked about the movie. I was initially pretty turned off by the camerawork, since it's one of those movies that does the whole "the characters are filming this on a hand-held camera as they're going about their daily lives" thing. Other than that, I think it's pretty clear that I think this movie is awesome. I didn't see it in theaters, but I wish I and a bunch more people did so more people would know about it.
Henry H. Henry
9
Greatest film bromance I’ve ever seen. Dudes literally living and dying together. The bond they have is one I couldn’t even fathom until seeing the movie. Were there a prequel to END OF WATCH that was 12 hours long with the two of them just shooting the shit while cruising around, I would recommend it even more than this film.
Joe Kennedy
8
This is a great movie. The highlight of my screening was watching my friend Tomas die laughing watching the "Quinceañera and Starbucks" scene.
Smigoversen
Recent Bromance Reviews