More Platinum Albums Than 2Chainz
THE BOOK OF ELI (2010) 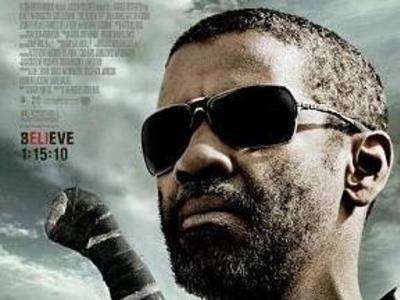 Any movie starring Denzel Washington will be the shit. Any movie. If you don’t agree with me, you can go take a long walk off a short pier. He’s the man, TRAINING DAY, INSIDE MAN, AMERICAN GANGSTER, MAN ON FIRE, the list goes on and on. If you’re making a movie, you call his ass up, offer him the job. If he takes the gig, you have your lead. if he isn't into it, you call Tom Cruise or Matt Damon or some shit knowing full well that your movie will probably suck.

“Who should we cast to play a bad guy?” Some director asked his staff. “Easy” they replied in unison, “We should get Gary Oldman!”

Damn straight they should, because with the exception of the HARRY POTTER movies (Sirius Black) and Christopher Nolan’s DARK KNIGHT Trilogy ("Comish"), Gary Oldman crushes playing the bad guy. You couldn’t film anything in the 90s without Oldman showing up dominating: FIFTH ELEMENT, AIR FORCE ONE, LEON THE PROFESSIONAL. Game. Set. Match.

Carnegie (Gary Oldman) sees that Eli can really fuck people up with his fighting skills and invites him to roll with his crew. Eli is like, “Nah, Dog”. So Carnegie send over this smoke show babe to like dome him up or whatever and convince him to join the Carnegie rough riders.

Instead, he rolls out and Carnegie sends his boys to go fuck him up and take his Book Of Mormon. Eli continues to fuck shit up for the remainer of the movie. Dudefest-wise, I'd give it a "quite". The last ten minutes of the movie have so many twists that you feel like you're watching every M. Night Shyamalan movie at once.

Brian Kennedy may or may not be centaur.

R A T I N G S
7
Denzel Washington is a blind guy with a braille bible and kicks everyone’s ass, saves Jesus.
Brian Kennedy
6
So there are some cool parts, and I'm always down for some post-apocalyptic shit as long as you don't clearly misunderstand the definition of "zombie" like my colleagues do constantly. But a Braille bible comes in like 6 volumes for the Old Testament alone, so that can't be the book that Eli is carrying. And why is Gary Oldman so pissed when he ends up with a magic tiny Braille bible? Even assuming nobody reads Braille, it would be so easy it to decode it. Anyway, like a 6 or whatever, I guess.
Pete Hall
7
If Denzel had piped Mila Kunis I might've gone a little higher with my rating, (but being blind and able to murder easily is still pretty dudefest.) rephrase part in paraentheses
Pockets
Recent Post-Apocalypse Reviews

Who is Brian Kennedy?
thebigd
I wonder what the book actually was.
Dudefest Movies
10 MOST DUDEFEST MOVIES