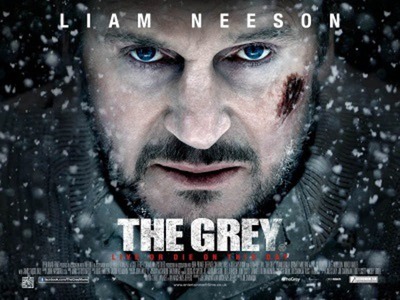 Named after the color of wolf skin, the PETA-protested film THE GREY was conceived when someone who has movie creation powers (finally) asked, “Why has no one combined Liam Neeson and wolves yet!?” That man was presumably awarded $10 million and a gallon of cocaine for his efforts, and from there THE GREY was born.

Now gentlemen, get your Nepi-pens ready, because THE GREY starts out with Liam Neeson acting AND narrating. Neeson plays John Ottway, a guy with a gorgeous wife who works in the snow all day. Ottway’s profession is wolf hunting, because dudefest, and for unexplained reasons, Ottway contemplates suicide with the barrel of his gun in his mouth. However, he hears the howl of a wolf and opts not to pull the trigger. The next scene features Ottway boarding a plane.The plane is not great at flying, and it crashes into the snow equivalent of a desert in the mountains. Ottway and six other dudes survive, and we find out that their three biggest threats are the cold, the altitude and the wolves.

The group of seven (six after a few wolves turn one of the dudes into a tasty snack) faces some initial internal tension as one jackass in the crew questions Ottway’s leadership regarding staying alive, despite the fact that Ottway hunts wolves for a living and thus knows a shit ton about them AND the fact Ottway is played by Liam Neeson and thus is much more important to the story. This jackass is kind of like that kid who you have to invite to your sleepover because your mom is friends with his mom, even though he thinks it’s funny to nut tap everyone who falls asleep before he does. I spent a large portion of the first half of the movie hoping for a ten minute slowmo scene of wolves eating his face or dick. Eventually, after he’s attacked by a wolf and Neeson saves his ass, he repents and becomes a contributing member of the crew.

Going back to the original seven survivors and proceeding with a spoiler: after the one dude dies, the remaining six collect all of the deceased’s wallets so they can be identified, leave the wreckage, and venture towards the forest in the south. On the way there, the guy who had been hurt the worst from the wreck and was falling behind gets demolished by wolves before the others can even run back to help him. The five remaining dudes set up camp in the woods, where the said jackass receives said attack and is saved by said Ottway. After venturing on the next day, the dudes are slowly picked off one by one, each in a different way: severe altitude sickness, falling from a makeshift line across a canyon, left for dead by choice, and drowning. This naturally leaves only Ottway alive. As he takes the last step he can take, he kneels down and starts going through all of the men’s wallets. At one point he looks up, sees about a dozen wolves, and realizes that he is in the wolf nest, the place he had been trying to avoid. Accepting his fate, he arms himself with all the shards of glass he can find, and the movie ends right as he’s about to attack the alpha wolf. I definitely did not expect all of the dudes to die, but hey, wolves are apparently killing machines.

R A T I N G S
8.5
THE GREY featured a fair amount of dudes fighting wolves, but most of it was actually wolves eating dudes. The movie contained more scenes of dudes just shooting the shit than you'd expect in a survival movie. The beauty of these scenes is that a wolf could attack at any time, so I'd be on the edge of my seat listening to the dudes talk about life and shit and preparing for a wolf to hop out of the darkness and eat a face real quick.
Joe Kennedy
8
Don't go into this one thinking it's just TAKEN with wolves. It's not. It's a movie about the struggle for survival, and I think it does a fantastic job at that. Also Liam Neeson fucks shit up.
Henry H. Henry
9
Liam Neeson, wolves, the Alaskan wilderness and a running time under two hours? This movie immersed me in Alaska so well, I'm fairly certain I had placebo frostbite after watching. If you don't like the ending, you should absolutely check out Inception.
Matt Stoke
Recent Survival Reviews

Hey guys, check out the movie review I wrote. It's about THE GREY.
Dudefest Movies
10 MOST DUDEFEST MOVIES