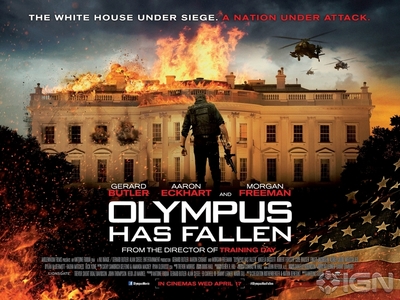 Jamie Foxx is introduced to us as The President of The United States of America who has a plan for peace in the Middle East. That plan involves pulling out all American military presence in the region. Smell that? Smells like some shit people might not be too happy with. Channing Tatum shows up as John Cale, a single father to an obnoxiously smart 11-year old girl. Tatum has an interview at the White House for a Secret Service job. Maggie Gyllenhaal, looking a lot like that chick from The Dark Knight, is his interviewer.

Pretty soon, there’s a janitor pulling a bomb out of his trashcan and the movie moves forward predictably from there. The Capitol blows up, The White House gets taken over and single dad John McLane (sorry, John Cale) and President Django have to fight their way out.

The baddies come in and make short work of the most intense security system in the world (not to mention one of the highest trained security forces in existence), because reasons. However, after that, their aim becomes drastically shittier. They use like 40 bullets to take over the White House, but in the next hour and a half have an incredibly difficult time shooting anyone whose character has a name.

Tatum is surprisingly good here as the lone cop against the bad guys with help from some people over the radio (sound familiar?). He jumps some tables, smashes some windows, shoots a lot of dudes and generally causes a ruckus. He also gets his shot at some comedy with a few one-liners and some witty banter between him and the President. Additionally, he gets extra dude points for not stripping in this movie. Equally commendable is Jamie Foxx as the President. He gets some of his serious “I won an Oscar a few years ago” acting in as he looks out at Washington and longs for a better non-violent tomorrow. But he also lays down some serious ass-kicking swapping his dress shoes for Jordans and stabbing people with his own pen. Dudefest? I should say so.

All in all the film is a sort of Diehard/Air Force One/Independence Day (no aliens, sorry) all combined into one (and OLYMPUS HAS FALLEN, of course). I’d say the biggest selling point of this movie is it’s clear love for America. Any movie that sets a film largely about blowing shit up in the President’s house is alright by me.

R A T I N G S
8
A movie full of explosions and America? What’s not to like?
Matt Stoke
5.5
Pretty good, standard action movie. Gerard Butler and Aaron Eckhart were both pretty solid in it. I wonder how it compares to that Jamie Foxx/Channing Tatum version?
Henry H. Henry
Recent Escape Reviews