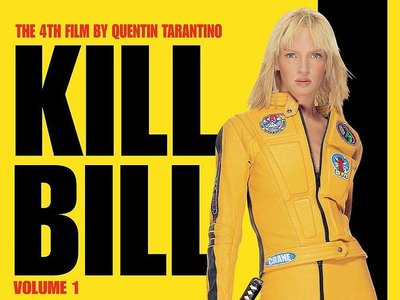 If you haven’t seen this movie you’re doing it wrong. KILL BILL is one of the most dudefest films ever made. Quentin Tarantino’s masterpiece follows Uma Thurman as “The Bride”, an ex-member of the Deadly Viper Assassination Squad, or DeVAS, who was killed by her partners on the day of her wedding. Or so they thought. She survived a gunshot straight to the head- which we are allowed to see in gruesome, vivid detail. Shortly after waking up from her coma, a man pays a hospital orderly to have sex with her lifeless body. Uma Thurman bites the man’s fucking tongue off and then proceeds to slash the orderly's Achilles tendon before smashing his head in with her room's door screaming, “WHERE’S BILL?!” Then she steals his truck, the "Pussy Wagon”.

The Vipers were comprised of four women with incredible ninja skills, most of them wielding Katanas. Uma Thurman set out to kill all of them after she escapes from the hospital. She arrives at Vernita Green’s (Vivica A. Fox) house and they say hi with hand-to-hand combat. The fight is paused when Vernita’s child runs home from the school bus. They appear to have stopped altogether when Vernita attempts to shoot Uma with a gun hidden in a cereal box. She misses and Uma instantly kills Vernita with a throwing knife. Two down, two to go. We are shown on her list that she has already killed O-Ren Ishii. We flash back.

O-Ren Ishii portrayed by Lucy Lui is now a criminal leader in Tokyo. We are shown her current ruthlessness as well as her back story (in Anime form). Uma Thurman has a new Katana forged by a retired sword smith in preparation for her fight against O-Ren. When she confronts O-Ren in a restarurant, O-Ren orders her legion of Samurai to dispense with Uma. Known as the Crazy 88, all of them take on Uma in one of the most ridiculous fight scenes in the history of cinema. The bloodshed and violence that occurs is so overwhelming it becomes comical. At times it is intended to be serious and at others entirely farcical. Uma dispenses with the Crazy 88 as well as O-Ren’s personal bodyguard before finally confronting O-Ren herself. After a prolonged sword fight, Uma comes out on top by chopping of the top portion of her head. VOLUME 2 will, hopefully, follow the rest of her revenge killing spree.

Matt hasn't done his dishes in a while, check his kitchen if you want to find him.

R A T I N G S
9
Fantastic revenge film. But for the lack of dudes and explosions it might garner a 10. Uma Thurman is hot.
Matt Stoke
8
Uma Thurman is a motherfucking dude. Body count: one million.
Pete Hall
9
Great shots of Uma Thurman's feet peppered with some gratuitous violence, what's not to love?
Pockets
9.5
Fun fact- Quentin Tarantino owns the Pussy Wagon. It wasn't a prop. It's a real car and it's sitting in his driveway.
Henry H. Henry
Recent Revenge Reviews