For All Your Dickbutt Needs
THOR: THE WORLD OF DARKNESS (2013) 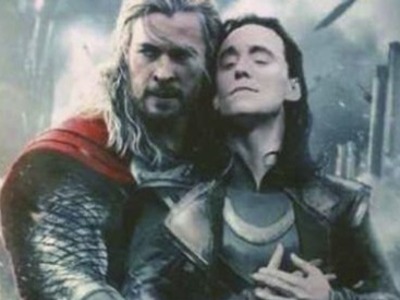 Do you look at the movies in your local cinema every week and wish you saw more Marvel films filling up the slots? If so, then THOR 2 is out there for you. This one is the latest Marvel movie to come out, filling that comic book superhero fix that America needs every six months or so. I wouldn't call THOR: THE WORLD OF DARKNESS particularly special in any way, but it's pretty much what we've come to expect from Marvel's movies lately. Thankfully, that means it's fun to watch, so we're safe.

First thing's first, let me ease the anxiety of all the people out there reading this who didn't end up seeing the first THOR. I will assume they've seen THE AVENGERS, because everyone in the world saw that one. From THE AVENGERS, we know that Thor is a god-like person from another world who occasionally comes to Earth to kick his brother's ass. Other than that, the only thing that we have to know from the first THOR is that he's for some reason in love with human Natalie Portman. And I don't mean that he's really into Natalie Portman the famous actress, he's into astrophysicist Natalie Portman who can't ever hold it together when she's in the same room as him. I'll touch on this later, but that is all you need to know from the first one.

The movie starts out with Loki being thrown in jail, Thor jumping around the galaxy bringing order to the Nine Realms, and Natalie Portman getting infected by some evil interplanetary energy or something. Thor then finds Natalie and takes her to his homeworld of Naboo. There are some evil elves/aliens can sense the energy that attacked Natalie and come after her, which leads to the inevitable multi-planet battles and lots of crazy exciting action. The dark elves want to make everyone live in a world of darkness, hence the title, and Thor acts as the Dayman to fight against this threat. Loki also becomes a major player in this story later on, which can only mean good things for the viewers. He is, without a doubt, the best character in this movie. That's not to take away from anyone else, it's just that Tom Hiddleston is so good as Loki. I don't even really remember the actual villain, because Loki's just so much better.

My main criticism really has very little to do with the movie, but with Thor himself and the dumb decisions he makes. In the first couple opening scenes, we get introduced to this chick who's hot, a badass fighter, and most importantly is the same species as Thor, who's very clearly into him. Even Thor's dad, the king of Assguard, told him to go for it.

So what does Thor do? Nothing, he just stays with Natalie Portman. It's not even a small point of conflict in the movie. The thing here is that he made the wrong choice. I mean, if he cares about her looks, he's not exactly losing either way, but if I were thinking about a partner I'd at least want her to have the same life expectancy as me. Human Natalie's guaranteed to die about 3000 years before Thor, so maybe that should've come into the equation. I'm just saying that Thor might be putting all of his eggs in the wrong basket. I can only hope that he's just playing the long term game here, knowing the other girl will still be there way after Natalie dies. Hey, he bangs her in the comics, so he probably will in the Marvel Cinematic Universe (MCU) too.

We already know there will be a next time because the AVENGERS 2 and THOR 3 are both slated to be released. Marvel knows that we eat this kind of shit up and ask for seconds. Another Marvel movie was teased at the end of THOR 2, and it's going to be their ballsiest one yet. It's called GUARDIANS OF THE GALAXY, a movie with no well-known superheroes, but it will have a talking raccoon and Vin Diesel as a tree. From the clip at the end of THOR 2, it looks like it's going to be weird as fuck, but I'm still looking forward to it. Why? Because Marvel hasn't really failed me yet. THOR: WORLD OF DARKNESS might not be ground-breaking, but it's got all the action you'd expect to keep you entertained.

Henry Henry can't make it to the phone right now, but if you leave your name and number he'll try to get back to you as soon as he can.

R A T I N G S
7
Nothing special from Marvel, but solid action movie that held my interest for pretty much the whole time. Also, Tommy Hiddleston is great at Loki and his role made the whole movie much better.
Henry H. Henry
7
It's definitely hard to top Loki as a Marvel villain, and Dark Elf villains in this one do not.
Joe Kennedy
7
Thor is the Dwight Howard with better comedic timing of the Marvel Universe. He's big, dumb, and needs a crafty little motherfucker like Loki or James Harden to help him succeed. Let's just say I'm more excited for AVENGERS 2 than THOR: WORLD OF DARKER-NESS
Smigoversen
7
I think the picture for this one kind of says more than actually seeing the movie. Lot of brotherly love goin' on, and it was good to see Nat Portman again. Aside from that, meh?
Evan Finkle
7
This movie was more of a crap train than CRAP TRAIN AMERICA: AVENGER ONE. I wish I had seen it before writing this though.
Pete Hall
7
My least fav Marvel movie so far. Brought up a lot of PHANTOM MENACE post-traumatic stress for me. Also, Kat Dennings? Hard pass.
Scrooge
Recent Superhero Reviews