Unforunately, it's not entirely accurate: the producers did want the role of Rocky Balboa to be played by a big star, but Stallone appealed to them and because he managed to keep the budget around $1 million, the project was given the green light with John G. Avildsen (AKA not Sylvester Stallone) as director. The movie turned Stallone into a massive star, and he actually went on to direct all the sequels (except for ROCKY V which was directed by Avildsen, but I don't know that we can blame him for that).

If you don't know the plot of ROCKY, you are clearly anti-America, and therefore are the reason the terrorists won. Even if you've never seen it, trust me, you know the plot of ROCKY. It is exactly like every single underdog sports film released since then (of which I assume you have seen at least one), with the exception that Rocky loses his big fight at the end. And no, I refuse to apologize for spoilers in a review about a movie that came out almost 40 years ago. So basically, it's THE KARATE KID (also directed by Avildsen) but the main kid loses at the end. Seriously, if you watch THE KARATE KID right after watching ROCKY, you're just watching the same movie twice. Ralph Macchio is even from Newark, NJ, which is more commonly known as "Way Shittier Philadelphia."

ROCKY is awesome because Rocky loses at the end. Seriously, Apollo Creed is the undefeated heavyweight champion of the world, and Rocky is an unknown semi-pro boxer whose day job is collecting on debts for a loan shark and breaking thumbs (even though he's too nice to actually break anybody's thumbs). I gotta say there's pretty much no way Rocky would even survive that fight, even if Apollo Creed had completely stopped training before the fight (as is implied). It's Rocky's determination that allows him to go all 15 rounds, taking Creed's punches directly to the dome and just refusing to be knocked out. Poor guy's face should be absolutely fucke- ohh.

I love ROCKY because it made boxing popular again (remember boxing? You know, irrelevant sport, run by criminals, rampant corruption- no, not the World Cup, the other thing- fuck, not the Olympics, the one with only punching) for a while after its release. I also love it because I love Philadelphia (it's a great city and I love all their sports teams and shut the fuck up everyone). Even though Sly grew up all around the East coast (born in NYC, lived in DC, high school in Philly, college in Miami), he seems to genuinely love the city and you can really see it in ROCKY. Philadelphia has embraced ROCKY and it's become a huge part of the city's identity: the theme (Gonna Fly Now) is played before Eagles games, clips are played on the jumbotron at Phillies games, and Philadelphia institution Pat's King of Steaks (inventor of the Philly Cheesesteak) features a plaque on the sidewalk commemorating the film. 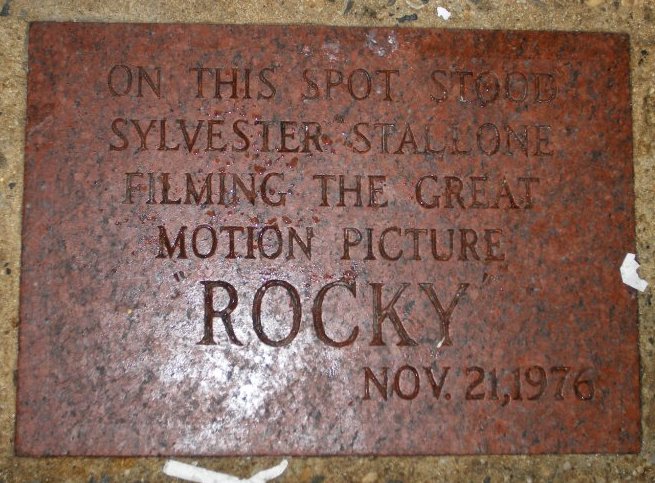 The plaque in question, covered in garbage; if I don't make the obvious "Philly is trashy" joke here, some asshole will make it in the comments.

All in all, ROCKY is a solidly dudefest movie. It is the classic rags to riches underdog sports film, the one all sports movies that followed just fuckin' copied. It launched Stallone's career- without it we wouldn't have THE EXPENDABLES, and that's a world I refuse to live in.

Pat Holland will straight fuck you up if you talk shit about Philly, and in the next breath ask why people think all Philly sports fans are violent and rude. Direct all hate mail directly to the TRASH, bitch! (Also, here.)

R A T I N G S
8
Mother. Fucking. ROCKY. I seriously never wanted to see this movie because of how weird Sly Stallone looks in that poster. I was like...why is that weird clay alien boxing against Earthlings? Anyway, definitely see it, it's fucking awesome and really dudefest. Except that if this were real life, Rocky would be 100% dead after the first three punches in the first round. You come at the King, you best not miss.
Pete Hall
6
Not my favorite ROCKY. I prefer the one who teams up with Bullwinkle to protect America from Pottsylvania. If they reboot this movie, (ok WHEN they reboot this movie) I hope they change the trainer's name to Bullwinkle.
Smigoversen
8.5
ROCKY won the best picture Oscar in 1977 and I think the Academy should have taken this opportunity to model all future Oscar statues after Rocky's killer bod. Major missed opportunity there. It's too bad Rocky lost the fight, but there are 5 other ROCKY movies, so hopefully he wins a fight before he breaks his face, oh wait... his brain, oh shit... before the steroids explode his aorta (see ROCKY IV), FUCK!
Fritz Tamarack
8.5
Sylvester Stallone in his least incoherent role. Great theme song.
Joe Kennedy
9.5
Never has a man climbing the stairs to an art museum felt so triumphant. Also, Dick Butkus.
Pockets
Recent Quest Reviews

Philly is a trashy piece of garbage. Also, this movie gets the "Fraturday drunken head nod", which as we all know is the highest attainable praise.
thebigd
This movie was sweet. I loved the punching.
Dudefest Movies
10 MOST DUDEFEST MOVIES