We'll Kill Your Dreams, So You Don't Have To
INGLOURIOUS BASTERDS (2009) 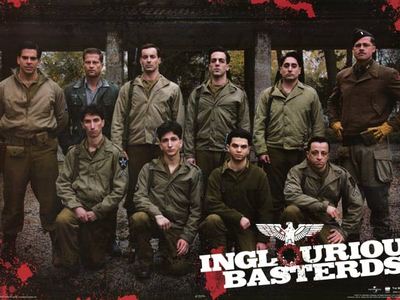 We've all seen INGLOURIOUS BASTERDS. And by "we" I mean everyone who is writing this review. It's one of Tarantino's finest and most dudefest films, and features not one but THREE intense scenes set at a table, which is over twice the Tarantino average. There are essentially two stories in the film but naturally I'll only be talking about one of them. We all know which one that is. We'll call it "The Story That's Actually Revelant To The Title Of The Movie" or "TSTARTTTOTM" for short or "T. Start T. To Trademark" for weird. It's the one where a bunch of dudes kills a bunch of Nazi's and steal their hair with the skin still on it.

The movie opens with the first of the two intense table scenes (one of them takes places in the other story and is thus excluded from TSTARTTTOTM). Nazi Colonel Hans Landa (Christoph Waltz), nicknamed "The Jew Hunter", drives to the dairy farm of French, bearded Tom Selleck in order to inquire about some missing Jews. Landa and French, bearded Tom Selleck talk about life, love, and happiness (I dunno, I'm too lazy to read the subtitles), until Landa asks to switch to English. After a long discussion involving pipe smoking and milk drinking, Landa eventually discerns French bearded Tom Selleck is indeed hiding Jews, and has him point out where they are, which is the basement. Landa brings in his team of dudes with machine guns, and they tear apart the basement, but a teenage girl gets away. This girl's connection to TSTARTTTOTM ends here.

We're then introduced to First Lieutenant Aldo "The Apache" Raine (Brad Pitt). He announces to a team of eight Jewish-American soldiers, including Sergeant Donny "The Bear Jew" Donowitz (Eli Roth) and Private First Class Smithson "The Little Man" Utivich (Ryan Howard), that they will be following him into Germany to kill Nazis, and each of them owes him one hundred Nazi scalps. Awesome.

Cut to a scene where the Basterds are repaying their debt to Raine as he interrogates three survivors of their most recent rampage. One of them refuses to cooperate with Raine, so he says to The Bear Jew, "We got us a German here. Wants to die for his country. Oblige him." Donowitz comes out with a baseball bat, and proceeds to beat the Nazi officer to death with a baseball bat. It's quite satisfying. One might even say sublime. In this scene we're also introduced to Hugo Stiglitz, a German sergeant prisoner who was freed by and joined the Basterds after killing a baker's dozen Nazi officers, by Samuel L. Jackson in the only part of the film he narrates.

After a very long commercial break involving a Nazi war hero and an intense table scene, we find the Basterds in Paris teaming up with British soldier Lieutenant Michael Fassbender (Michael Fassbender) and dressed like Nazi officers to meet a German actress in a bar. She's a spy for the Allies, and is going to help them get into a screening of BIRTH OF A NATION or something like that, so they can take out all the Nazi big wigs that are attending. But she won't let them go until they have a drink at the bar. Well, spoiler alert, bitches be trippin', because intense table scene number two of TSTARTTTOTM occurs with an actual Nazi and ends with everyone except the actress dying. Even though all of their German-speaking member deads, Raine and the remaining Basterds decide to go forward with the movie screening plot. How will they do it? They don't speak German! Well they speak a bit of Italian, and since Germans are idiots, they figure they can pass as Italians. To the movies we go!

At the film screening, shit goes down. You figure, "Oh, well this is a World War II movie, so it's probably going to be like that Tom Cruise Nazi movie where if you lose an eye you gain an English accent, and Hilter doesn't die in the end. Well, Tarantino wanted none of that. Instead, Landa sells out the Nazi big wigs to Aldo "The Apache" and "The Little Man" for a home on Nantucket and the Medal of Honor, the theater is locked and set on fire in an incident unrelated to TSTARTTTOTM, "The Bear Jew" and another bastard mow down Hilter, Goebbels, and the entire crowd with machine guns, and the explosives the Basterds brought go off in the theater, presumably killing everyone in the screening. Oh rejoice! As soon as Raine finishes carving a swastika into Landa's forehead, the credits roll.

R A T I N G S
9
There's a lot more of the other story in the movie than I remembered. Bummer.
Joe Kennedy
9
I got really excited when I learned that this movie featured a guy bashing Nazi brains in with a baseball bat, and that it was Ryan Howard. Imagine my disappointment when they turned out to be different people. The movie starred Ryan Howard from The Office (B.J. Novak) and not the fastest player to reach 200 home runs in the major leagues. Still, any movie where Brad Pitt kills Nazis is fine by me.
Pete Hall
9
We got Hitler? I'm so confused. I thought he committed suicide in his bunker while the Russians were surrounding him? This movie is really messing with my memory of AP US History junior year.
Matt Stoke
8.5
We should probably have someone else write a second review about the other half of the movie Kennedy ignored. Related, Christoph Waltz is fucking terrifying.
Smigoversen
8
Feel-good movie of the year. Killing Nazis is pretty dudefest.
Henry H. Henry
9
My favorite Rom-Com in recent memory. Shoshana and Landa really hit it off, especially when they're tasting all that cream in the cafe. Oh yeah, all them murders really got my rocks off too.
Fritz Tamarack
9
Although I'm "not Jewish", Hitler definitely would have killed me if he had the chance. This movie makes me feel a little better about it.
Evan Finkle
Recent Revenge Reviews

As the laziest movie rater on dudefest, I still have no idea how I didn't actually rate this one, and instead ended up doing this in the comments. Sorry Joe!
thebigd
I'd probably give this about a nine too.
Pete Hall

Stoke, how bad is your memory that you forgot all of your AP US History from Junior year already? You haven't even taken the test yet.
Dudefest Movies
10 MOST DUDEFEST MOVIES