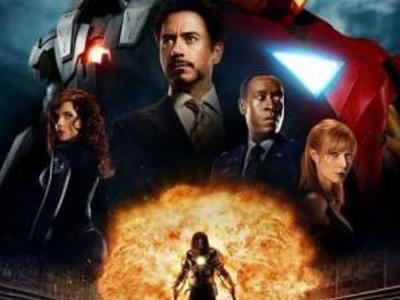 So IRON MANG was pretty good right? Yeah it was! Obviously we were all hoping for a sequel that wouldn't suck and derail the franchise with something god awful (See MATRIX RELOADED for more on that). Anywho, they decided to make a second one of these action-filled, RDJ-staring bad boys.

Terrance Howard decided that he was not going to be in the sequel to IRON MANG. So Hollywood had to do that awkward thing where they replace him with a different actor and just hope that everyone forgets who it was in the first one, or is cool with the fact that there is someone new filing in. Personally, I just like to think the first actor got a ton of plastic surgery with the mad $$$$ he made in the first film. So now, Don Cheadle plays Rhodey, which as it so happens, is way more believable. And who doesn't like Don?

There are actually two villains in this IRON MANG installment, but one of them is just the rival weapons manufacturer who gives the actual villain the means to try to kill Iron Mang. Mickey Rourke plays himself as the villain. Somehow he is supposed to be Russian, but I think the studio execs just decided that since no one can understand what he is saying normally he can pass as a Russian. He's all butthurt about Iron Mang's Dad stealing all the glory from his dad, and so he tries to kill Iron Mang.

Meanwhile, Iron Mang is now a celebrity but he's all "tied down" to Gwenyth Paltrow so he bangs a lot less chicks in this one. So Mickey Rourke builds and designs a bunch of robots, Don Cheadle has to be a dick to RDJ for a bit, but everyone ends up happy at the end, except for Rourke and the other villain, who I'm refusing to give any credit to in this review.

Jimmy Fraturday doesn't always write movie reviews, but when he does, they usually aren't very good. He'll leave it to the rest of the crew and tell you interesting stories via email.

R A T I N G S
8.5
I thought this installment was enjoyable. Everyone loves teamwork.
Jimmy Fraturday
8
Scarlett Johansson's ass is featured very heavily in this movie, and I am 100% OK with it. It's an amazing ass, not that I've ever seen any photos of it on the internet, and certainly never downloaded them. That would be illegal.
Pete Hall
7.5
People really don't talk about the fact that Movie Downey discovers a new element in this film. This element has been incredibly important in cancer research and the effort for world peace. I really don't know why that discovery slipped past the headlines.
Joe Kennedy
8
I didn't even see this movie, well I saw the trailer and the first one so thats basically it right?
Fritz Tamarack
7
I like when the old timey footage of Tony's dad is used. It reminds me of Disney / Steampunk shit.
Evan Finkle
7
Best Iron Man? Nope. Good enough and fun to watch? Yep.
Henry H. Henry
Recent Superhero Reviews

CINEMA
HERCULES
Review by Joe Kennedy
daveballs69
Why isn't Jimmy Fraturday funny? Like is that the joke?
Scrooge
Dave Balls? Is that you, you old rascal! It's me, Mike! Mike Hunt, from high school! Tell your brother Hugh I say howdy!
Dudefest Movies
10 MOST DUDEFEST MOVIES