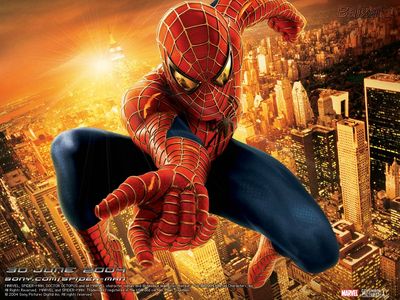 Ah, SPIDERMAN. A classic. Featuring Tobey Maguire and Kirsten Dunst back when they were things, and James Franco and Elizabeth Banks before they were things. It's a true American coming of an age story about a boy who uses personal loss and inspiring last words from a loved one to grow into himself and win the heart of the girl of his dreams.

Teenage boy and high school senior (although he looks super old for his age) Peter Parker (Tobey Maguire) is a science whiz who gets picked on for looking like Tobey Maguire. He lives with his Aunt May and Uncle Ben, next door to the girl he's been in love with since childhood, Mary Jane Watson (Kirsten Dunst), a super hot redhead and apparently a high school senior (late teens look different than people in their late twenties, casting directors) who's nicknamed "MJ" because of her skills on the b-ball court. His best friend, Harry Osbourne (James Franco) who also looks much older than a high school senior, is super rich because his father, Norman (Willem Dafoe), is a successful scientist who runs a company that supplies weapons to the military.

Peter is on a school field trip to a place of science when he receives a bite on his hand from a genetically enhanced super spider while photographing Mary Jane in a scene that was, if I'm being honest here, incredibly awkward. Way more so than I remembered. He feels super sick by the time he gets home, and he goes to bed to sleep it off. When he wakes up the next morning, after finally getting enough sleep (he was probably always up super late studying for nerd stuff), he feels rejuvenated and like a new man. He finally admits to himself that the glasses he was always wearing don't actually look "super cool" on him, like he thought, so he tosses them. He also notices that he's in tip-top shape, which I feel should have been super obvious to him, but maybe he just couldn't see himself in the mirror before because he was always wearing those stupid glasses he didn't need.

With his new-found confidence, and determined to win over his childhood crush, Peter decides he needs to buy a super sweet ride and finds a temporary job in order to make some cash. After completing the job, his super douchey employer only gives him a fraction of the money he was promised. Pissed off, Peter silently observes as a man who robbed the super douche escapes. The robber ends up killing Peter's uncle in a super sad turn of events for our protagonist.

After graduation, Peter starts become super isolated from his friends and family, spending his evenings (and sometimes work hours) wandering around the city by himself. Harry, now Peter's roommate, starts seeing Mary Jane behind Peter's back, which might put his super douche status above that of the super douche. Harry and Mary Jane's relationship deteriorates as Harry becomes super insecure about his place in Mary Jane's life and his father's opinion of Mary Jane, and Mary Jane falls for Peter, even kissing him in a dark alley (he was wearing a mask, so she "totally didn't know it was him"). Perhaps Peter takes the cake for super douchiest here, or maybe it's Mary Jane? Let's just say there's enough super douche to spare in this film. Anyways, Mary Jane and Harry eventually break up, and Mary Jane expresses her feelings for him. However, he tells her that he's not ready for a relationship right now, which was super unexpected and anticlimatic considering the whole film seemed to be building up to that moment. This moment of super blue-balls for both the star and the viewer is how the movie ends.

A subplot of the film features Norman Osbourne's slow descent into madness as his company and his relationship with his son gradually fall apart, culminating in Peter witnessing Norman accidentally kill himself with one of his inventions.

R A T I N G S
5.5
A decent amount of action for a teen drama. Super.
Joe Kennedy
4.5
I think Spiderman is a crappy superhero, and I'm not just saying that because spiders freak me out.
Pete Hall
8
Why all the low scores people? I thought this film was a great. Who knew the backstory of Nick Carraway was so action packed?
Matt Stoke
1.5
These guys didn't do their research. https://www.youtube.com/watch?v=ZnE3uyj9Grg&amp;list=PL-xkHEbewJQenrFnjmTu0o9PujEy4Lhgd&amp;index=8
Scrooge
6
I always hated Tobey Maguire... That's all I have to say about that.
Evan Finkle
3.5
Couldn't finish it. Or any of the original Spideys. Save that drama for yo mama Peter Parker - oh wait...
Smigoversen
7.5
What's up with the low scores. It was great at the time, and it kicked off the current superhero movement. Probably wouldn't have Avengers without it.
Henry H. Henry
Recent Superhero Reviews

Upside down Spiderman kiss? Inspiring teens and nostalgic 20 somethings to get a little razy since 2002
Dudefest Movies
10 MOST DUDEFEST MOVIES