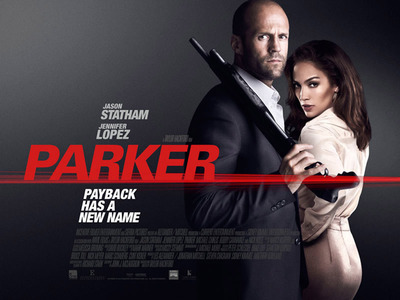 Remember that character that Jason Statham played in that movie he was in that time? Don’t you worry uncertain reader, that character is in this movie. Today’s Jason Statham movie is PARKER, which has a character named Parker based on a character also named Parker in the novel Flashfire by Donald Westlake, who wrote under the name Richard Stark, who authored a novel called Flashfire that stars a character named Parker who is the subject of the movie that I’m reviewing. Parker is a heister with a heart of gold, who takes his heisting job very seriously, and expects everyone he works with to exhibit professional behavior when committing felonies. Wait, this movie sounds like Stolen so far. God I hope he doesn’t have a daughter.

The movie starts out similarly to THE DARK KNIGHT. There is a five-man heist where a bunch of heisters are dressed as clowns and spend a fair amount of time carpooling. The similarities end there. Parker is one of the dudes who heists, and he does it dressed as a priest. Post-heisting, the crew then gets in an argument with Parker because he doesn’t like their low standards of heist so they try and fail to kill him, and leave him on the side of the road instead. However, Parker is incapable of death, so he obviously survives. His goal is to get his share of the cash from the heist.

We later find out that Nick Nolte is in the movie. At first I thought the movie was doing the old “young guy dressed up as an old man” shtick, but no, it’s just Nolte. He actually looks likes that. His character has a large number of lines, but it is unclear what language he is speaking. My best guess is “nickel stuck in garbage disposal”. Parker needs help from time to time in the film and turns to Nolte… At least I think that’s what happened. I could only understand one half of each conversation that they had. I was able to make out that he’s Parker’s best bud heister and also the father of Parker’s girlfriend, but I used visual clues to discern that.

Anyways, Parker follows Michael Chick-less and the crew to some rich people’s island where Jennifer Lopez’s character works. Lopez, in her first role that doesn’t require her character to marry a rich white dude, plays the world’s hottest/worst salesperson. She pitches to her customers the way Colin Firth’s speaks to England, she drops Debbie Downer-style personal issues on her potential clientele, and she tries unsuccessfully to seduce Parker in every scene. Parker does not give in though, because Nick Nolte is terrifying. Not in the movie, in real life.

The movie ends with Parker killing all the bad guys but then, you get smacked in the face with a(n epic) TWIST: Parker doesn’t bang Jennifer Lopez. There is a lot more stalking and heisting than fighting and killing in the film, which was quite surprising after seeing the trailer like every time I turned on a television before the movie came out. Parker is super badass, and there are some solid fight scenes, like one where Parker gets one of his hands Jesus-ed, but even that and the fact that I got to look at Jennifer Lopez in the movie weren’t enough to take it above mediocre.

R A T I N G S
4.5
If you’ve always wanted to see Jason Statham attempt a southern accent, then this movie is an absolute must see. Otherwise, it’s not.
Joe Kennedy
4
Did Jason Statham kick a lot of people’s asses in this movie? Yes. Was it very good? Eh, not really. Let’s just say I didn’t hate it at all, but I wouldn’t bother to put it on again.
Henry H. Henry
5
Classic Statham. He's the King of only playing one super badass character.
Smigoversen
Recent Jason Statham Reviews
thebigd
Good review bro. James Statham movies are the tits.
Jimmy Fraturday

I give this movie at 9/10, only because it is proof that any character Statham plays is immortal. The number of times he is shot, stabbed, beaten, etc. in this film is incredible. Does he go to the hospital for weeks and weeks, slowly recover and then move on with his life? Of course not, he goes back for more. And kills people.
Dudefest Movies
10 MOST DUDEFEST MOVIES