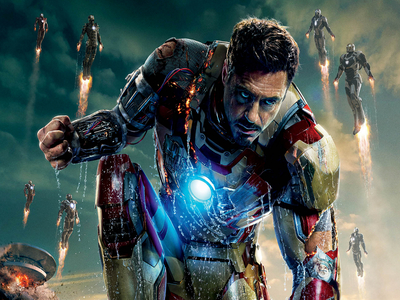 All right, fair warning, I haven’t seen any of the other IRON MANG films or other Marvel Films besides THE AVENGERS, so this review should be a blast.

Three Iron Mang suits explode as "I'm Blue" by Eiffel 65 comes on the stereo - so far, so good - as we flashback to New Years Eve 1999. (The year was included to explain the otherwise bizarre song choice.) Tony Stark (a.k.a. Robert Downey, Jr.) and a hot young scientist are in an elevator. She's working on some plants regrowing limbs project, and he's working on having sex with her. They are interrupted by a weird, crazy looking scientist who wants to talk to Stark about an idea. Tony smartly ignores him and bangs the hot chick scientist. You get the feeling this might be of importance later in the film....

Anyways, Iron Mang plays with some new Iron stuff trying to combat some pretty intense anxiety he’s been having over his near-death experience during the Alien invasion of New York in THE AVENGERS. Then we find out some terrorist who calls himself The Mandarin (Ben Kingsley) is doing terroristy things. So the government puts Don Cheadle in a Red, White, and Blue Iron Mang suit, nicknamed The Iron Patriot (so dudefest), to go find the terrorists.

Oh, guess what, that crazy scientist from before is back with a new, suave haircut, 20 pounds of muscle, and good looks. He invented some sort of device that can alter people's DNA so they can regenerate limbs, which he used on himself to cure the injury he had when we last saw him. He tries to sell it to Pepper, Iron Mang's girlfriend and head of Stark Industries, but she thinks it could be easily weaponized, and shuts him down.

So Iron Mang’s fat friend (by the name of Happy, played by Jon Favreau) who used to be Stark's personal bodyguard and is now the head of security for Stark Industries, is spying on a guy (Baddie #1) who was with Mad Scientist a few scenes ago. Baddie #1 is exchanging something with another guy (Baddie #2). Happy goes to intercept them, but when they get in a fight, he gets his ass handed to him. Mostly because Baddie #1 can heal his wounds quickly and regrow body parts. Baddie #2 then blows up after screaming, “help me!” This causes a big ol’ mess that Baddie #1 survives after regenerating some body parts. Happy is lying badly hurt on the ground. Sad.

Stark visits Happy and tells the press that the terrorists can come to his house if they want to fight him. Then he tells everyone who watches the news (~15 people worldwide) his address. Well, that was dumb, cause they swing by after that, and they blow his entire house to shit. Also the sort-of hot scientist chick from the first scene shows up right before that but they don’t get to talk. Tony is using a new suit that isn't totally ready yet, but is good enough to still kick some ass anyways.

This is where the plot just gets stupid. Tony's new suit flies him to rural Tennessee for some reason and then breaks. There had been an explosion similar to the one we witnessed a few scenes ago in the town Stark turns up in. Stark goes to investigate said explosion and tries to talk to the bomber's mother. There were some other Baddies trying to talk to her too and Stark and the Baddies end up fighting each other in true action film form. Nothing really happens because of it.

Somehow (using computer skills) Stark finds out that the terrorists are in Miami and heads over there. Now, it gets asinine. The terrorist leader (Ben Kingsley) is not a terrorist at all. He's an out of work actor who the Mad Scientist hired to be a fake terrorist to explain the exploding people from his experiments.

So...lemme get this straight. He had some flaws in his cool science experiment to regrow peoples limbs, so to explain them blowing up, he created a fake terrorist? And all of this really stemmed from Stark not hanging out with him on New Years like 14 years ago? This movie is stupid.

The film descends into madness. Don Cheadle and Iron Mang both get captured in Miami, but obviously they escape, beacuse they are frickin Iron Mang and Iron Patriot. The terrorists who aren't terrorists sure act like terrorists when they attack Air Force One and capture the president. Their plan, which is (at best) unconvincingly motivated, is to kill the president live on TV and control the VP as a puppet president in return for giving his niece the regenerative powers they all have.

You can probably guess how it ends, they save the president, the VP get arrested, and everyone is happy. To show Pepper how dedicated he is to their relationship, Tony Stark destroys all the Iron Mang suits at the end of the film before declaring, "I will always be Iron Mang."

Roll credits. Also, after the credits we see Iron Mang waking up Dr. Bruce Jenner and realizing IRON MANG 3 was all just a story he was telling The Hulk. So overall, it’s an enjoyable film with witty dialogue, great action, and good comedic relief, but a plot that falls apart halfway through the film and makes it really difficult to engage in towards the end.

R A T I N G S
7
Not bad, a few funny moments, some of the action looked fake, but I guess that was alright. The bad guys kinda looked weird when they heated up.
Matt Stoke
8
The hilarious twist with the Mandarin and the action sequence of like a thousand Iron Mang suits at the end elevate this one for me. I also loved the sex scene between Rebecca Hall and Gwyneth Paltrow towards the end. Wait, nope, I may have just dreamt that. Never mind.
Joe Kennedy
8
I don't like that you reviewed a movie you clearly didn't understand. You didn't even make a Terrence Howard joke. This is why we can't have nice things, Matthew.
Pete Hall
7.5
I didn't even read this thing! OR WATCH THE MOVIE! But I saw the first one so I think I get it.
Fritz Tamarack
8
The image we chose for this movie makes me wish that Iron Man made it into PACIFIC RIM. Giant Iron Man would be the shit.
Evan Finkle
8
I could not have been more down for another Shane Black/Robert Downey Jr. collaboration. If you haven't seen KISS KISS BANG BANG, do yourself a favor and watch that premium Downey action.
Scrooge
Recent Superhero Reviews