We Only Hate Each Other
THE BOONDOCKS SAINTS (1999) 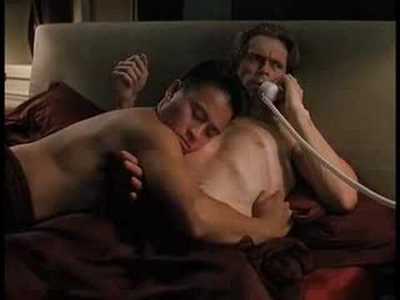 I'd just like to start off by saying that THE BOONDOCKS SAINTS is far and away the worst remake of THE BLUES BROTHERS I have ever seen. Now granted, it's also the only remake of THE BLUES BROTHERS I can think of, but this movie strays so far from the original that it's almost as if the screenwriter, director, and actors were trying to make a completely different movie. Some remakes toss you a curve ball (AVATAR had 1.5 times more dimensions than DANCES WITH WOLVES), but THE BOONDOCKS SAINTS tosses you like a knuckleball or a spitball or the elevator pitch from Backyard Sports or some crazy shit like that.

Here's the thing though: THE BOONDOCKS SAINTS starts out exactly the same THE BLUES BROTHERS. (Note: for the sake of both brevity and clarity, for the remainder of this awesome review I'll be referring to THE BOONDOCKS SAINTS as BB and THE BLUES BROTHERS as BS.) Both movies star a pair of religious brothers who don't know their father, live in a shit-hole apartment of hilarious proportions, and decide that they're on a mission from God after a run in with the law. Seriously. BB is like a shot-for-shot copy. It's absurd.

At the twenty five minute mark of BB I was super duper pumped up. It was a great remake at that point: the dialogue was hysterical, there were a couple of fights, and Willem Dafoe was doing a (dare I say) legendary John Candy impression. Sadly, it wouldn't last. Below is the transcript of the audience's reaction during the screening of the BB I attended. Yes, I recorded it. I'm always recording, getting a one-up on the NSA. Oh and I was just watching it by myself in my room. I just wanted to sound important.

"Oh man I think this is the part where they say that they're on a mission from God! It looks like they're on mission from God to—wait, what? What was their mission? Holy balls. Well, that's certainly different. I don't see how that mission is going to get their band back together. But—oh god, is that Ron Jeremy? Why?"

To sum it up, it gets different real quick at that point. The BB dudes are on a mission from God to murder "mean people" (all of whom turn out to be Russian, which probably would have worked better/made more sense in the Cold War era), and the movies veer off into separate but equally dudefest directions. Sprinkle a touch of ultimate dudefest, a stereotypical gaysian, and Willem Dafoe cross-dressing on top of a mindless rampage movie with a classic "he was their father the whole time!" twist and you've got BB. Add sixties R&B and an inept police force to a bunch of Nazis losing in the end and you've got BS.

Overall, I'd recommend THE BOONDOCKS SAINTS if you're looking for a movie with violence and a cop questioning his morality, but do not, and I repeat do not expect it to be anything like the original BLUES BROTHERS. It will crush your hopes and dreams, as it did mine.

Joe Kennedy is looking for someone in the dream repair or hope rebuilding field. Craigslist has not helped him thus far, so please do not direct him there.

R A T I N G S
8
For those of you who only read the ratings, be aware that this is not a BLUES BROTHERS remake.
Joe Kennedy
5.5
Kennedy, I wish I had read your warning before I saw the movie. I was sorely disappointed. Still better than BLUES BROTHERS 2000 though.
Pete Hall
6.5
I saw the sequel first. Huge mistake. Willem Dafoe has some great ultimate dudefest scenes though.
Scrooge
4.5
I know a lot of people love this movie, but it doesn't "do it" for me.
Henry H. Henry
7.5
You shut your whore mouth Henry! You're WRONG! YOU'RE! WRONG! Motherfucker trying to talk shit about a movie I enjoy, that won't stand
Smigoversen
Recent Investigation Reviews